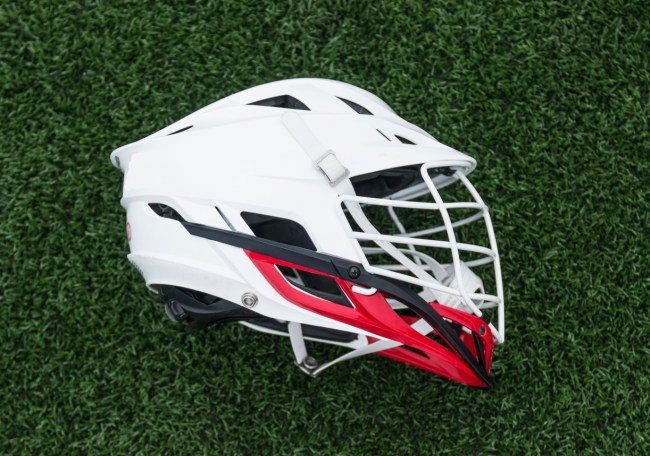 There are plenty of people who can accurately be described as “freaks of nature”—a phrase I’m allowed to use because I’m 6′ 10” and view it as a term of endearment.

You run into plenty of problems being a massive dude like myself, the most notable of which is probably finding pieces of apparel that you can actually fit into.

It’s probably been over a decade since I purchased a pair of pants in the store, and the last time I went to try to get shoes, the guy who was helping me basically laughed when I asked if they might happen to have any size 16s in stock.

As a result, I have nothing but sympathy for Alex Chu, who’s currently a student at Wheaton College in Massachusetts and theoretically a player on the school’s lacrosse team. However, I say “theoretically” because the freshman has been unable to play in any games because his head is too dang big for any helmet he can find.

Alex Chu was recruited to play lacrosse at @wheaton, but he's spent this season on the sidelines. The problem? The college's helmets don't fit his head, and his specially-made high school helmet isn't certified by the NCAA. How he still hopes to play – at 11 on @wpri12. pic.twitter.com/3ewH7bNnp3

According to NBC 10, the goalie was good enough at the high school-level to earn a spot on the team, and while he wore a custom helmet in previous years, he can’t find any that are approved by the NCAA, which means he currently isn’t allowed on the field.

“It’s been frustrating. It’s hard to see something I love feel like it’s getting away from me. I really do love lacrosse and it means so much to me.

Chu’s coaches said one company is attempting to get them a helmet as soon as it can but that it won’t arrive in time for the season-opener on Wednesday.

From one big dude to another: I feel you, man. I feel you.