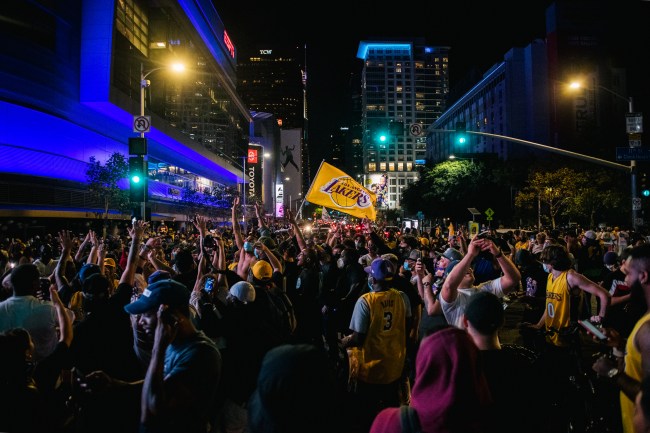 The celebration is underway in Los Angeles.

On Sunday night the Lakers won their 17th NBA championship nearly 8 months after the death of their biggest star Kobe Bryant.

This one is for you brother, for you Gianna, for Vanessa, for Natalia, for Bianka and for Capri. 🐍🖤

Congratulations to the entire @Lakers team, @JeanieBuss and the Lakers family for winning the 17th championship!! 👏👏👏👏 pic.twitter.com/glYG421whq

After the team’s championship, fans made their way to downtown LA and began chanting “Kobe” in front of the Staples Center.

Los Angeles is taking to the streets outside of Staples Center after the the Lakers win championship No. 17. pic.twitter.com/w25dbE76hZ

STAPLES Center is the place to be rn. pic.twitter.com/BCRHxMHgDy

Did it for the MAMBA🐍 — downtown LA is going off! pic.twitter.com/Dj3YNWuT8V