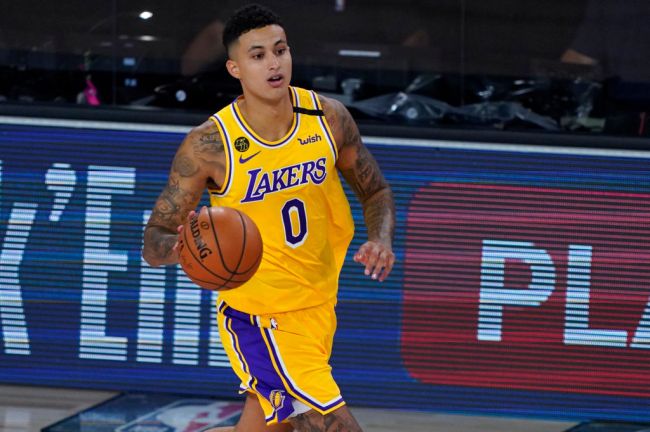 Kyle Kuzma is letting it be known that he was not happy with how the Lakers used him last season but fans don’t want to hear it.

During an interview with Bleacher Report’s Tyler Conway, Kuzma voiced his frustration with being given an inconsistent role last year with the Lakers that didn’t give him the opportunity to showcase his skills. According to Kuzma, he’s confident he could score 25 points per game and make the all-star team if given a “consistent role” on a team.

“My biggest thing is I just want to play within a consistent role,” Kuzma said. “If I have that ability, I’ll be able to showcase what I can really do. There were parts of this year—and even anywhere else in my career—when I’m in a consistent space, I’m out there handling the ball, making teammates better, scoring, shooting, defending, rebounding. I think if I’m in that space, I’ll be good.

Kuzma’s numbers were stronger across the board when he started in his natural 4 position, and he still sees himself as a player capable of averaging 25 points per game and reaching All-Star heights.

“I definitely can. I definitely believe that, too. I don’t really care what nobody thinks or says. I know myself, and I know my ability. It’s hard to be consistent in an inconsistent role. I’m excited for a more consistent space next year,” Kuzma said.

What's the inconsistent role??? He played 30 minutes a game. And LeBron and AD missed big chunks of the season that was his chance to eat

In the playoffs his minutes were cut because he didn't produce https://t.co/jg5909OoOf

Send his bum ass back to the G League or send him to Shanghai Sharks 😭😭😭 https://t.co/p4JLDrq0tV

Nigga you had ample chances with all the injuries the Lakers had. Just say you ain’t play good n move on. https://t.co/aQ5iOml8ZR

Yes In Shanghai you had all the opportunities and still stunk it up you peaked in your rookie year bum 😂😂😂 https://t.co/gdUcr7cIqi

I totally agree with him. He would kill it, if he was playing for Guangdong Tigers. https://t.co/QB5rTLkvxX

You have an inconsistent role, because you BLOW. On a damn team with absolutely no bench help and you’re supposed to be the third “star”. Gimme a break lmao https://t.co/ET6qaWJy5S

How many shots would he need a night to average 25? https://t.co/Sxgk4kvGWF

I believe this too. When we trade him to Portland for Dame it’ll totally be a fair trade 😅 https://t.co/mh5dw9NmfG