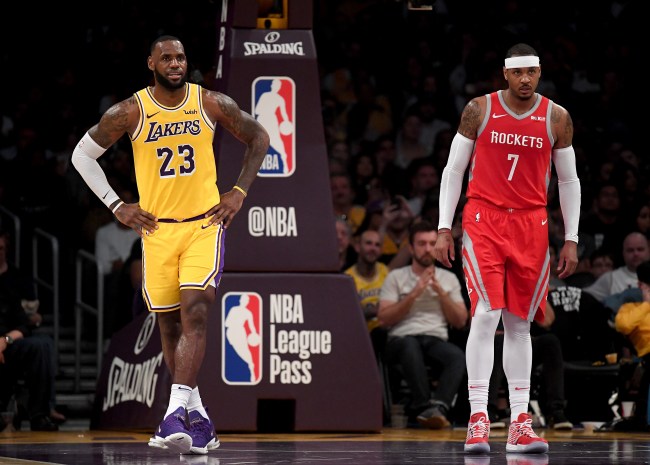 It seems like Carmelo Anthony could make his to L.A. after all.

This afternoon The Atheltic’s Sam Amick reported that Melo is getting to choose his next destination and it’s likely that he will to sign with the Lakers.

Carmelo Anthony is ready to pick his next team and, yes, the Lakers still appear to be the likely landing spot.

According to Amick there are still some hurdles to jump for Melo to end up in L.A.

The Lakers, who have a full roster and would have to waive someone to sign him if he was waived, continue to be tied to Anthony more than any other team. But according to a Lakers source, the fact that the roster is full is not a small obstacle. Not only is it unclear how they would clear the roster spot to add Anthony, or if there’s a possible trade to be made there with the Rockets, but a source close to James said Anthony’s conditioning and the overall state of his game are considered key factors here in terms of convincing the Lakers to add the player who had the worst season of his career with the Thunder and wasn’t any better with the Rockets.

Lakers fans don’t seem to happy with the idea of Melo ending up with the Lakers.

Melo is going to end up on the Lakers, isn't he? https://t.co/7bc4CvDSTj

Melo had an opportunity to sign with us years ago in free agency and didn’t. Why should the Lakers do him a favor and sign his old washed up jack shooting ass now? Stay home and work on your marriage bro

Lakers win a great game with the young guys going off and getting contributions from everywhere, and then sure, let’s sign melo. pic.twitter.com/aOrKpLutQR

I thought we were trying to make playoffs