ESPN Writer Reveals Scenario That Would Allow The Lakers To Land LeBron James, Kawhi Leonard, And Paul George This Offseason 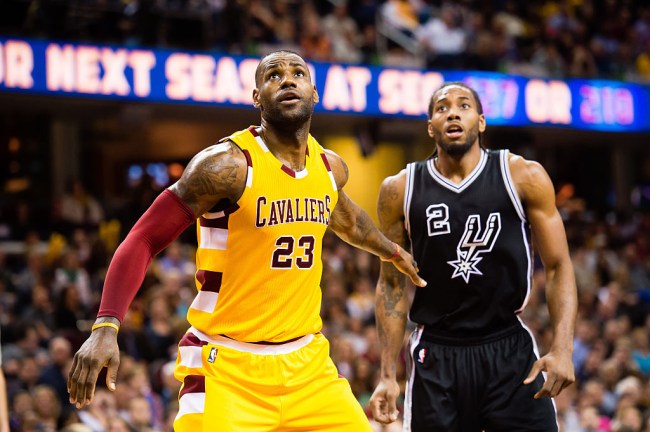 The LA Lakers are positioned to add to two superstar/ max players this summer, but what if they could add a third superstar into the mix? Today, ESPN’s Kevin Pelton detailed a scenario in which the Lakers would be able to add LeBron James, Paul George, and Kawhi Leonard this offseason.

The Lakers signing George and James, both of whom can become unrestricted free agents if they decline 2018-19 player options, is easy enough. They can create sufficient cap room merely by waiving forward Luol Deng and stretching his contract, then renouncing the rights to their free agents.

Adding Leonard to the mix makes the math trickier — even before we account for the fact that he’s still under contract with the San Antonio Spurs, who would have to sign off on a trade.

Though Leonard is making substantially less than the current max salary at $20.1 million for 2018-19, combining his salary with max ones for LeBron (an estimated $35.4 million) and George (estimated $30.3 million because he’s two years shy of the experience necessary for the largest max bracket for players with 10-plus years in the league) puts the Lakers over $85 million in salary without considering any other players or the remaining amount of Deng’s stretched salary.

The Lakers would probably have to let go of two of their young stars to make a trade work according to Pelton.

Presumably, a Lakers package would be built around one of the last two No. 2 overall picks — either Lonzo Ball or Brandon Ingram. Sending back Ball or Ingram alone probably wouldn’t get a deal done with the Spurs. Since Deng must be included in this version of a deal, the Lakers are going to need to add more value. That could mean parting with All-Rookie first-team pick Kyle Kuzma, whose ability to create shots is less valuable on a team with three superstars.

Even if the Lakers pull off this move it seems like their roster could be completely depleted but who having Leonard, James and George on one team would probably make it worth it.