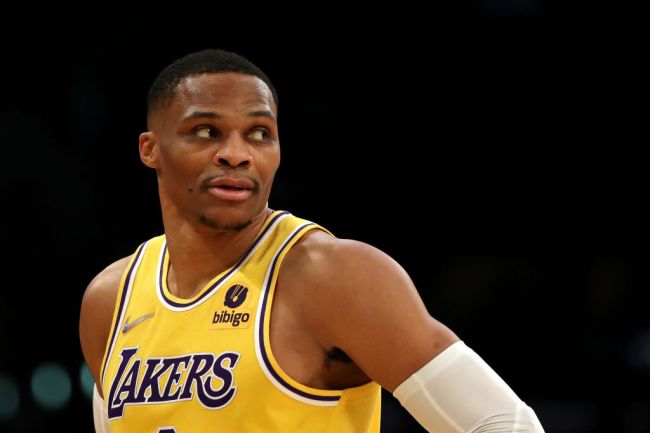 Things are about to get real ugly in Lakerland.

On Wednesday night, Lakers head coach Frank Vogel benched Russell Westbrook late in the fourth quarter during a tight game against the Indiana Pacers. Vogel was asked why Westbrook didn’t play late in the game, and he gave an honest answer.

Frank Vogel on his decision to sub out Russell Westbrook for the final four minutes of the game: “Playing the guys that I thought were going to win the game”

Coach Vogel was asked why he benched Westbrook down the stretch. He replied: “(I’m) playing the guys I thought were gonna win the game.” pic.twitter.com/5wEnu2ZBKg

After the benching, Westbrook refused to answer questions from the media.

After being benched by Frank Vogel late down the stretch, Russell Westbrook has skipped media availability tonight.

According to ESPN’s Dave McMenamin, Lakers management sanctioned Westbrook’s benching after the coaching staff had debated sitting the guard the past few weeks due to the fact that he’s a liability on defense.

New story: Frank Vogel’s decision to bench Russell Westbrook was sanctioned by Lakers management, sources told ESPN. With the team teetering around .500 at the midway point, the staff in essence was told “you got to do what you got to do” with Westbrook https://t.co/DSKiaBSHSe

Over the past week and a half, Lakers management has told the coaching staff to coach Westbrook as they see fit, even if that means pulling him from a game, as Vogel did for the final 3 minutes, 52 seconds of the fourth quarter against Indiana, sources told ESPN.

One source close to the situation described the message from management to the staff as, “You got to do what you got to do.”

Apart from his offensive struggles, Westbrook failed to execute on the defensive end. The final straw, pushing the staff to honor their instinct to bench him, was when Caris LeVert blew by Westbrook on defense for a layup with 7 minutes, 13 seconds remaining.

The coaching staff had been debating whether to pull Westbrook from late-game situations for weeks, sources said, but always refrained because of worries about the lasting impact on Westbrook’s psyche.

The Westbrook situation in LA was already awkward with the team struggling, but things are certainly going to get worse now that the Lakers are openly admitting that they’re benching him late in games.