Memes/GIFs: Everyone On The Internet Is Trolling The Lakers For Their Abysmal 3-Pt Shooting 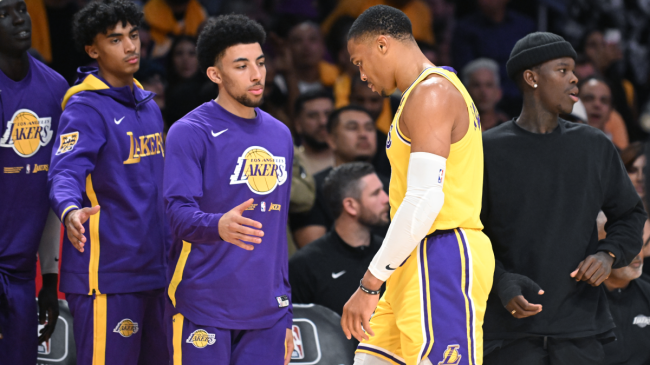 The Lakers have been bad in 2022. Absolutely awful. The team is off to an 0-3 start, losing to Western Conference foes in the Warriors, Clippers, and Trail Blazers.

Los Angeles has been handcuffed by some abysmal shooting. As a team, they rank dead last in the NBA, hitting less than 41% of their attempts. That includes a horrendous 21% clip from beyond the arc.

LeBron James is shooting at his lowest clip since the 2006-07 season. Russell Westbrook is just 1-for-12 from three-point land. Patrick Beverley is shooting 20% from the floor.

It’s not been just one player. Everyone has struggled. Of the Lakers’ top seven three-point shooters in terms of volume, none is converting on more than 26% of their attempts. Together, they’ve gotten off to the second-worst three-point shooting performance in NBA history.

Those woes have led many to troll Los Angeles on social media.

The internet has been roasting the Lakers by posting hilarious memes online.

Some show actual footage of the team’s stars airballing or bricking wide open shots from beyond the arc. Even LeBron James isn’t safe from the criticism.

“It didn’t even draw the net it was so short.”

The Lakers' announcers let LeBron have it 😅 pic.twitter.com/5aTc1jbD7K

I mean, it’s gotten so back that opposing defenses are purposely leaving Los Angeles players open from the three-point line.

The Lakers are generational at bricking my god 😭pic.twitter.com/9cfimvz2ne

And then, there are the hilarious posts from fans and media with their own unique reactions.

The Lakers are shooting 25-118 from three this year😭pic.twitter.com/koyD01Rhnw

It’s been bad for Los Angeles thus far, but there’s still time to turn it around. While the 0-3 start isn’t ideal, the Lakers can get the season back on track and find a way to the playoffs.

For that to happen, though, the shooting has to improve. If it doesn’t this might become a scheduled weekly post.