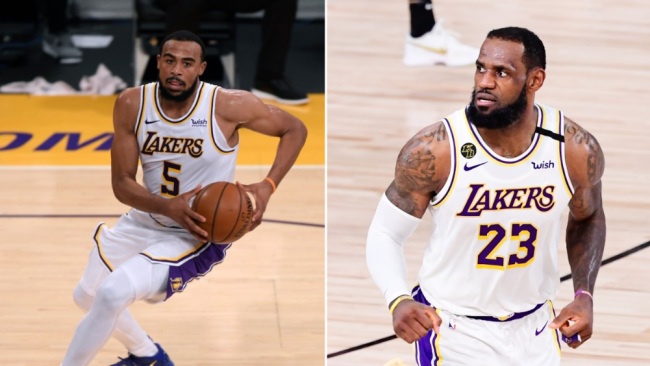 Lakers’ Talen Horton-Tucker has become a star in LA during the preseason but one of his old tweets mocking his superstar teammate has resurfaced which could become a bit of a distraction for the team.

On Tuesday, an old Tweet from 2015 where Horton-Tucker mocked LeBron James by calling Delonte West his father resurfaced and went viral on the social media app.

Horton-Tucker is clearly referencing the rumor about West hooking up with LeBron’s mother Gloria James back when they both played in Cleveland.

This rumor was highly embarrassing for one player. And for another, it entirely destroyed his reputation.

Back when LeBron James and Delonte West were teammates on the Cavs in 2010, West reportedly had a relationship with James’s mother, Gloria. When LeBron found out about this during the 2010 playoffs, he was evidently so distraught that he played very poorly—the Cavs were eliminated in the second round.

While NBA fans are trying to stir things ups it appears that LeBron doesn’t care about Talen’s old tweet as long as he continues to play well on the court.

Telling you right now! This kid is flat out SPECIAL! Mark my words https://t.co/KOYtlFxNVV