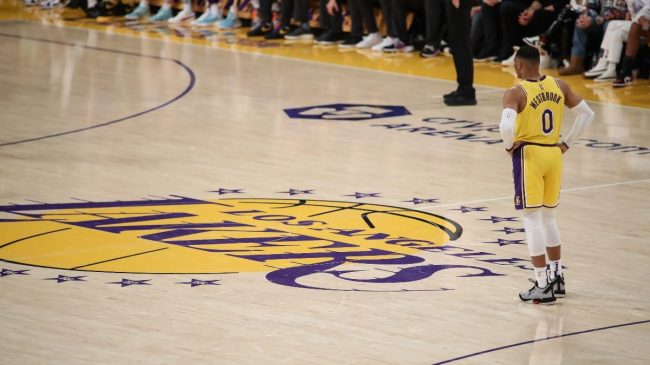 The Los Angeles Lakers were all over the rumor mill throughout the offseason and it seems that’s continuing. Considering LA is off to a cold start, the front office may opt to make a trade at some point in the season. With that in mind, rumors are heating up for a potential trade with the Charlotte Hornets.

According to The Athletic, Los Angeles is rumored to be interested in a potential trade for Terry Rozier. The Lakers and Charlotte were supposedly in trade talks during the offseason but nothing ever came to fruition. Even so, LA remains interested in the Hornets guard.

More from his Inside Pass, on where things stand with L.A. and Russell Westbrook.https://t.co/WPhB2DHYtn pic.twitter.com/j0tIDU84J6

However, it sounds like it could be a massive trade between three to four teams, per Shams Charania. As of now, nothing is set in stone. Additionally, it’s unclear exactly who the Lakers would give up in the possible trade. Russell Westbrook has been rumored to be available via trade all offseason. Even so, it’s possible the Hornets have no interest in him. Hence, the potential three or four-team trade talks.

We’ll see how it all plays out. The 2022-23 NBA season is young and there is plenty of time for the Lakers to get back on track. Regardless, we’re likely to hear these types of rumors until the trade deadline.

With that in mind, keep an eye on the Lakers and the Hornets, as both teams could be making some big moves in the coming months. Terry Rozier and Russell Westbrook could find themselves on new teams at some point.