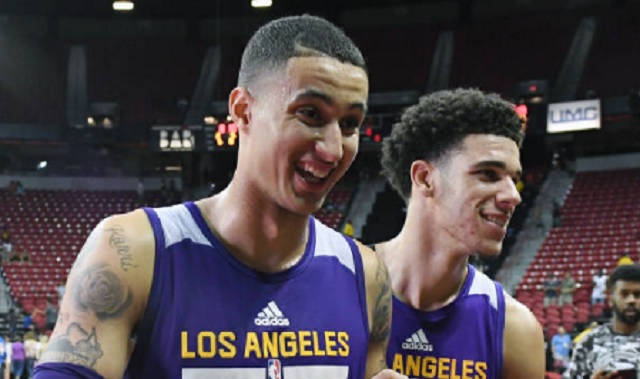 Yesterday afternoon ESPN reported that the LA Lakers front office had reached out to their young stars and told them to stop dissing each other on social media after Lonzo Ball released a diss record directed at teammate Kyle Kuzma.

The Lakers, who are attempting to recruit LeBron James this summer, have stepped in and have asked Kuzma and Ball to cut it out.

Though Kuzma and Ball are close friends, the Lakers had grown concerned about the increasingly personal nature of some of the recent roasting between two of their young stars, sources told ESPN.

Sources said the team spoke to both players and that there are no lingering issues and that both players agreed to tone down the joking insults on social media. After dealing with a social media fiasco involving the D’Angelo Russell-Nick Young video in 2016, the Lakers wanted to make sure to nip things in the bud before the potential of anything escalating.

The young Lakers are apparently on their best behavior now that the grown ups have given a stern talking to because now they’re sending boring respectful tweets to each other.

A machine works at all times…

Fans are kind of bummed that the Lakers youngings can’t be fun and entertaining on social media.

Roast each other man pic.twitter.com/CZ6TksqtSO

you two are being nice to each other.. are y’all ok

Me trying to calculate this level of trolling. pic.twitter.com/lDOUhfJIky