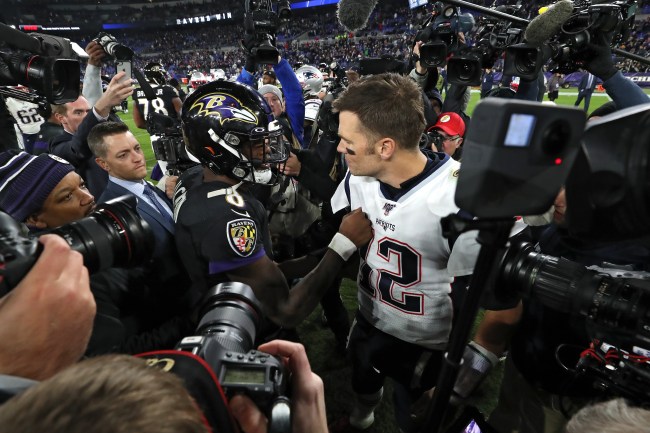 Lamar Jackson threw a dart in the Patriots undefeated season on Sunday Night Football, throwing for a touchdown and running for two more in a 37-20 Ravens win. The 22-year-old Jackson became the youngest quarterback in the Super Bowl era to defeat a team that entered the game 8-0 or better.

The second year quarterback’s performance against one of the best statistical defenses in recent memory may be a hallmark in his case for league MVP. But after the game, Jackson chose to respect his elder and heap praise on Tom Brady, who threw for 285 yards with one TD and one INT (but his 80.4 passer rating was his weakest since Week 5).

“Appreciate that,” Jackson replied. “The GOAT.”

Here is an alternative angle that shows Brady seeking Jackson out in a sea of cameras after the game to congratulate him on the well deserved victory.

Lamar Jackson had some kind words for @TomBrady after @SNFonNBC, via the @NBCScameraguys pic.twitter.com/2KrRn2G6cN

During Brady’s weekly call into The Greg Hill Show on Monday morning, he had this to say about the opposing quarterback who’s 20 years younger:

“He plays very well. He has a very unique style and he does a really good job with his ball handling. And your’e never really quite sure whose got it and you hesitate for a little bit and he pulls it and runs and it’s pretty tough to stop. So he’s done a great job for them and did a good job for them last year. He’s a really talented player.”

Jackson and the Ravens proved that they’re nothing to mess with.