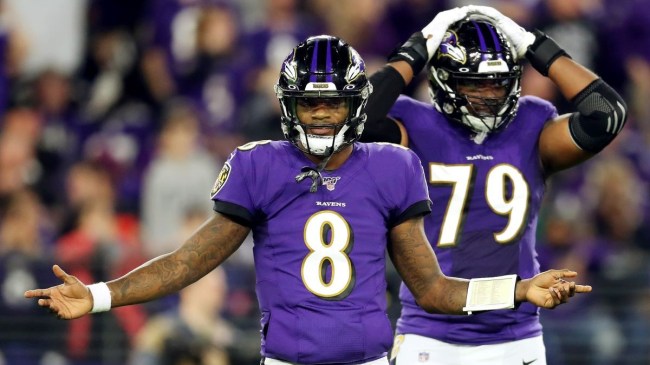 The Baltimore Ravens are 7-3 and sit atop the AFC North. But it hasn’t always been an easy path to get there. The Ravens have been devastated by injury throughout the season and superstar QB Lamar Jackson hasn’t always looked himself. Jackson is also embroiled in a very public battle with the team over a potential long-term contract extension.

One of the key players that has dealt with injuries is star left tackle Ronnie Stanley. Stanley is a former first-team All-Pro and Pro Bowl selection. But he’s missed much of the last two seasons after suffering a broken ankle in 2020. Stanley played just one game a year ago and has missed time intermittently this season.

But he looked back to his best in recent games, appearing in the last six games for the Ravens, five of which were victories. Now, however, he made be headed back on the shelf and Jackson believes that it’s his fault.

Late in the third quarter of Baltimore’s 13-3 victory over the Carolina Panthers on Sunday, Jackson was sacked and rolled back into the ankle of Stanley. It was the same ankle that cost him nearly two years of his career. Stanley then hobbled to the locker room and did not return.

According to ESPN’s Jamison Hensley, Jackson feels responsible for the injury to his teammate.

“It was me who hurt him,” Jackson said. “So, I’m a little pissed off about that.”

Jackson also went to talk to Stanley after the game and the two appeared to be on the same page.

“I went in the locker room after the game, and I checked on him, but he said he’s pretty good,” he said. “He told me just don’t fall into him.”

The last thing the Ravens need this season is more significant injuries, especially ones that are self-inflicted.