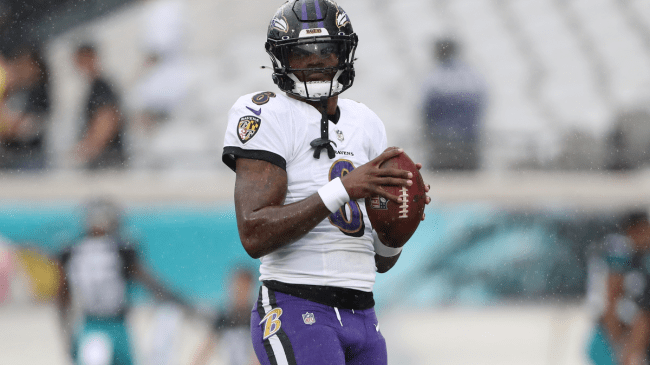 Lamar Jackson had some things to say to a Ravens fan on social media following his team’s 28-27 loss to the Jaguars.

The Baltimore quarterback is in the midst of a contract dispute with the organization, one that’s been ongoing since the offseason. The two sides were unable to come to an agreement prior to the season’s start, leaving the negotiations unsettled.

It’s been said that Jackson would like to acquire a fully guaranteed deal similar to division rival Deshaun Watson. The Ravens, though, say that Watson’s deal is an outlier and that his new contract should be structured more similarly to Russell Wilson’s or Kyler Murray’s.

Unable to come to terms, Jackson bet on himself in 2022 season. He’s hoping that his play on the field will help Baltimore realize his value in an offensive scheme that’s built specifically to suit his skillset. And thus far, he’s done a nice job.

Through his first 10 games, Jackson posted a 7-3 record with 16 touchdowns and just under 2,000 yards through the air. He’s also added 666 rushing yards to show off that versatility.

Jackson once again led his team to a strong offensive showing in his most recent matchup, throwing for 254 yards and rushing for another 89 against Jacksonville. Unfortunately, it wasn’t enough to squeak out a win as the defense blew yet another late two-score lead.

After the loss, a frustrated Baltimore fan took to social media to voice his displeasure with Jackson and the Ravens. The fan posted the following message online after the game.

When someone is asking for over 250 mil guaranteed like Lamar Jackson, games like this should not come to kicker Justin Tucker. Let Lamar walk and spend that money on a well-rounded team.

After seeing the back and forth on Twitter, a few followers also chimed in on the exchange. Some backed Jackson but most couldn’t condone the response.

One person wrote, “Well this is an unfortunate outburst from a team leader and supposed role model.” Another commented, “Could you imagine Mahomes, Allen, Prescott, Brady or Rodgers sending this tweet out? He needs an agent ASAP.”

This fan said, “How long until the Ravens force Lamar Jackson to delete this tweet? I doubt attacking a fan is part of the brand guidelines. I understand Lamar’s frustration with fans acting like keyboard warriors, but this doesn’t seem to be in line with the team’s community standards.”

It will be interesting to see if there are repercussions for the Ravens’ quarterback.