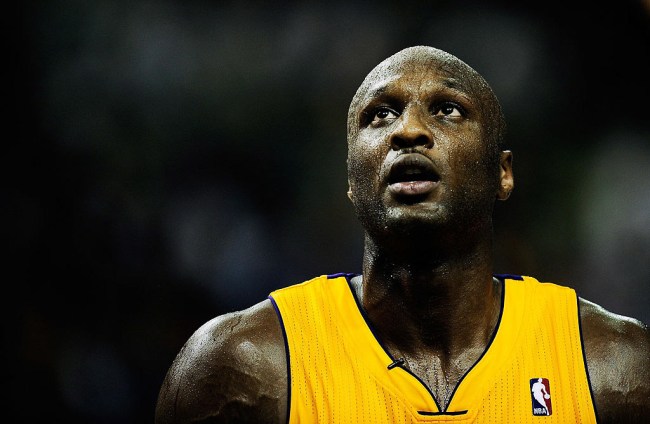 Lamar Odom was once a key member of a Los Angeles Lakers team that won two NBA championships. He was voted the NBA’s Sixth Man of the Year after the 2010-2011 season. That’s when it all came tumbling down, according to what Odom told Shams Charania in a recent interview for The Vertical.

According to Odom, when he was traded away from the Lakers after that 2010-2011 season to the Dallas Mavericks was the beginning of the downward spiral that would eventually lead to Odom experiencing a drug overdose in a Nevada brothel in October of 2015 which led to multiple strokes, kidney failure, a coma and eventually saw the former NBA star on life support.

“That trade from the Lakers basically ended my career and purpose,” Odom told The Vertical. “I was never really myself ever again. Being in L.A., the structure, the people I knew, it hurt leaving. I had great memories with the Lakers, with Kobe and Pau. That was a special time in my life.

“I think about it all the time, about how much I had left in the tank. I had issues going on. But barring injury, could I play in the NBA today? I could play. I should still be playing.”

Now Odom appears to finally have his life back on track. No more drugs, no more Kardashians, just him and his kids. There are even plans being discussed for Odom to sign a contract to retire as a Laker in training camp.

“I’ve thought about coaching with the Lakers, but I don’t know if I’m ready to commit myself,” Odom told The Vertical. “It was cool being back around that environment, watching Lonzo [Ball] work out. You could tell he will be special.

“It’s always good to be back around the Lakers’ facility. There’s nothing but good memories, besides that trade.”

There’s also another option for Odom now, who is still only 37-years-old…

“I might play in the BIG3 next year,” Odom says. “It would give me something to do. That league is going to last. It’s not going anywhere, and more dudes will get down with it. Getting $100,000 for playing, and three-on-three is nothing to these guys. They can play still. It was fun watching them, seeing the stars come out.

“I think the BIG3 could become international. It could tour. Basketball is an international game, and the four-point shot is entertainment. The reason it’s going to last is Cube – and celebrities come out for it.”

Between that possibility, two reality television projects, a tell-all book and his clothing line, Rich Soil, it sounds like we have most definitely not heard the last out of Lamar Odom.