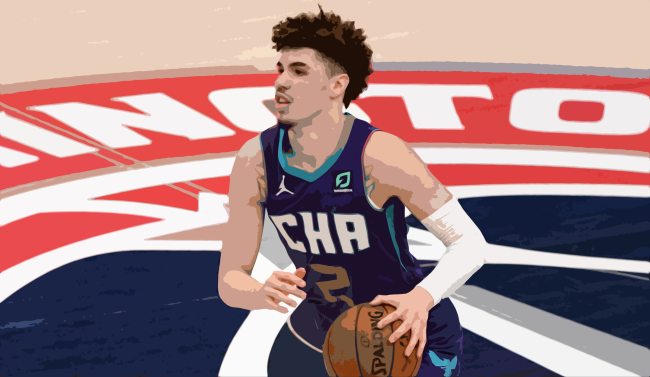 LaMelo Ball won the Rookie of the Year award this past NBA season after averaging 15.7 points, 6.1 assists and 5.9 rebounds per game for the Charlotte Hornets.

The 19-year-old took a very circuitous route in getting there, however.

Following his sophomore season in high school, LaMelo Ball skipped his junior year and a part of his senior year to play basketball professionally in Lithuania and Australia. Ball did eventually return to the United States, attending SPIRE Institute and Academy prep school before declaring for the NBA draft in 2020.

This week, in a new profile written for GQ, Ball makes it very clear, after signing a $35.6 million contract with the Charlotte Hornets, that he sees absolutely zero need for him to have attended college.

“My whole life, I always knew I was going to the NBA,” said Ball. “I always knew. Everything about this felt normal to me. I knew I’d have stardom. I grew up into it. I already had my life planned out. My whole life, I thought I was the star…. I ain’t even gonna say I’m a rock star. It’s something other than that. I’m something rare.”

Naturally, he has no regrets: “You wanna go to the league, so school’s not your priority.” He thinks the NCAA has to change and there should be more options for kids to make money before they get to the NBA (the Supreme Court opened a pathway toward that in a landmark ruling shortly after our interview). “We not trippin’ off school. We not dumb. We know how to learn. We don’t need school. And school not even teachin’ you sh-t — what the f–k is school?”

He felt isolated in Lithuania, and the local fans weren’t the kindest either. “N-ggas was throwin’ waters and Gatorades and they drinks at n-ggas and all that shit,” he says. In Australia, he was a constant triple-double threat but, after playing just 12 games before sitting out the season, also a mystery. When he entered the 2020 NBA draft, “there [was] a narrative out there,” Borrego tells me. “It can be complicated bringing a player like Melo in. ‘Will it be just about Melo?’ ‘Can you coach the kid?’ ‘Is there gonna be a show in town?’ ‘How much is the family involved?’ Those were all questions that were being thrown at us.”

LaMelo’s comments about skipping college to focus on trying to make the NBA is not being well-received by those who worry other athletes, who won’t be as successful as he has become, will try to copy his route to The League.

I am a Melo fan, I think his future as a Basket Player is bright, however, upon review of this quote...he needs to continue education in college. A star has to speak somewhat intelligently

Great advice for all the children that have 0 chance of every being a professional athlete, way to use your platform.

There’s definitely a place to criticize school and the system. And this is coming from a teacher too

Less than one percent of athletes make it to the pro level my brother. You not wrong but a lot athletes who ultimately don’t make it are f*cked

being born on third base thinking you hit a triple isn’t really a good look, especially when you’re the only one who can’t see it