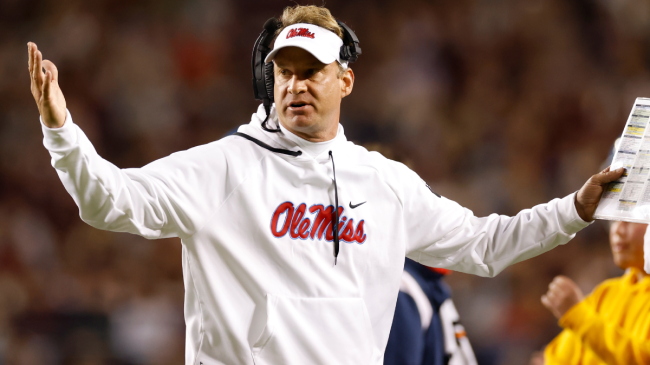 Lane Kiffin and the Ole Miss Rebels nearly knocked off Alabama last weekend in a huge divisional matchup that had SEC title implications. The Crimson Tide were eliminated from SEC Championship Game contention with LSU’s win over Arkansas, but the Rebs had a shot at making an appearance with a win over their western division rival.

Entering at 8-1, Ole Miss needed to knock off the Crimson Tide and hope for an LSU loss over the next few weeks. Unfortunately, OM fell 30-24 in a hard-fought battle. That ended the program’s latest opportunity to reach its first ever conference title game.

The contest was back and forth with the Rebels taking a 17-7 first half lead. Alabama, being Alabama, battled back, outscoring Ole Miss 23-7 over the final 35 minutes of action. The loss could hurt the Rebels in more ways than one, as many now speculate that Kiffin has become frustrated with the inability to get the program over the hump.

With some saying that his ceiling in Oxford has been reached, rumors of his leaving for Auburn have gained steam.

While Lane Kiffin’s been quiet on that front, he’s been outspoken on that loss to the Tide. In a press conference following the loss, the head coach went off on a reporter for complimenting the Ole Miss offense in a close loss. Kiffin exploded, saying the stats aren’t as important as the scoreboard.

The Rebels’ performance on the field wasn’t quite good enough to land the win, leading many fans to look at missed calls on the field as reasoning behind the loss. One play, in particular, has gained attention online amongst OM supporters.

Ole Miss quarterback Jaxson Dart was tackled on Saturday by Alabama defender Dallas Turner. While getting to his feet, Turner was seen shoving Dart’s head into the ground. The extracurricular activity might’ve warranted a flag, but officials let it go. A number of college football fans immediately referenced the referees’ alleged bias towards the Alabama program.

Lane Kiffin says he called Jaxson Dart’s mom to apologize for her son’s treatment vs Bama:

“She mentioned it’s a shame her son gets treated different based on what SEC program that he’s at on game day and protected different.”

“You can’t fine me for what someone else says.”

Kiffin said that he called Dart’s mom and she had the following to say. “It’s a shame her son gets treated differently based on what SEC program he’s at.”

While it’s definitely reasonable to think that he spoke with Dart’s mom, Kiffin used it as an opportunity to throw some shade at Alabama and the SEC officiating crews without repercussion. As he said in that press conference, “You can’t fine me for what someone else said.”

Despite entering the game ahead of the Crimson Tide in the SEC standings, the Rebels couldn’t garner the same respect from the officials as Alabama. We’ll see if that has any influence in Lane Kiffin’s potential departure to the Plains at Auburn.