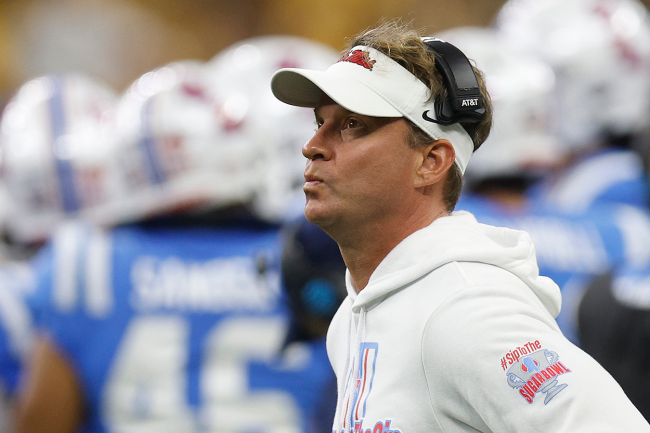 Lane Kiffin has signed a lot of autographs in his day. Recently, however, it has been a rather unique process.

Last fall, in Kiffin’s second season at Ole Miss, the Rebels rolled into Knoxville, Tennessee to face the Volunteers. It was the first time that he had returned to his former place of employment as a head coach since leaving Tennessee after one season for the USC job.

The game came with a lot of hype and to say that the Volunteer fanbase was emotional would be an understatement.

As the fourth quarter came to a close, Tennessee fans were frustrated— with Kiffin, with the officiating and with the score. In turn, they proceeded to completely embarrass themselves by throwing trash onto the field.

Most notably, a bottle of yellow mustard and a neon yellow golf ball landed on the grass at Neyland Stadium. It was utter chaos.

Since then, Kiffin has not been shy about addressing what happened. That was the case again on Monday.

During his time at the podium at SEC Media Days, Saturday Down South’s Connor O’Gara asked one particularly funny question. He said that he noticed Kiffin autograph a mustard bottle before he took the stage.

O’Gara asked if that has become a regular thing. Kiffin said yes.

I saw Lane Kiffin signed a mustard bottle, so I asked him if that had been a common occurrence.

"Yes, I've I signed a lot of mustard bottles and golf balls. It's been a unique offseason."

In addition, Kiffin mentioned his first pitch at an Ole Miss baseball game against Tennessee in March. Instead of a baseball, the 47-year-old trolled Morgan Wallen and the Volunteers by throwing out a neon yellow golf ball.

The Rebels lost that game and got swept in the series, but went on to win the College World Series. Kiffin joked that it was all part of his plan.

By throwing the first pitch against Tennessee, getting swept, keeping the team humble and running the table.

Kiffin is an absolute savage and is one of the most entertaining people in sports. Most people — outside of the salty folk in Knoxville — would agree!