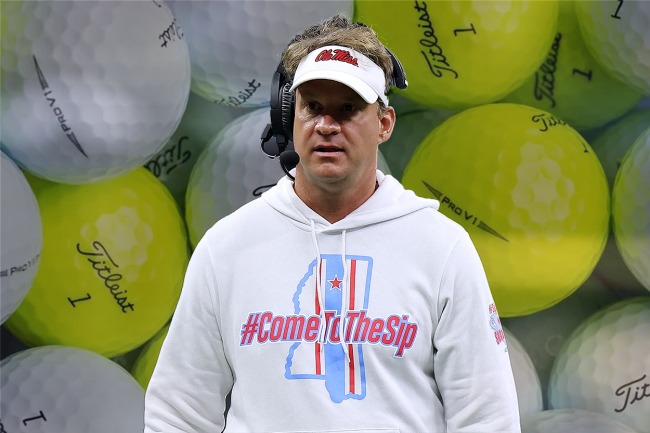 Lane Kiffin is not well-liked by Tennessee fans. That’s why his ceremonial first pitch in front of a sold-out crowd prior to Ole Miss baseball’s series against the Volunteers couldn’t be funnier.

After being let go by Al Davis and the Oakland Raiders in 2008, Kiffin accepted the head coaching job at Tennessee in 2009. However, the gig didn’t stick for long.

After Pete Carroll left USC for the Seahawks, the Trojans asked Kiffin if he wanted the job in 2010. He had previously served as the offensive coordinator during the Reggie Bush, Matt Leinart, Steve Smith, Dwayne Jarrett days. You know, when USC went undefeated and pummeled Oklahoma (cough cough, Lincoln Riley) in the national championship.

There was no way that Kiffin was saying no to the job offer. He resigned and left for Los Angeles after one season in the SEC.

Vols fans did exactly what Vols fans do and melted down. It was hilarious.

Kiffin did not return to Knoxville until 2016 as the offensive coordinator at Alabama. The Crimson Tide beat the wheels off of Tennessee and their former head coach flipped his visor into the stands on the way out.

Kiffin’s next return to Neyland Stadium came in 2021 as the head coach of Ole Miss.

He coached the Rebels to a 31-26 win over his former team in a wild, back-and-forth game. Near the end of the game, the Vols fans melted down again. As they do.

The orange-clad, sold-out crowd threw trash, mustard and golf balls at Kiffin. No seriously, someone threw a golf ball.

On his way off of the field after the game, Kiffin made an OBJ-esque water bottle snag. It was a poor showing from Tennessee and they lost.

Kiffin has continued to troll his former school and did so in grand fashion on Friday.

Ole Miss baseball is ranked No. 1 in the country, depending on where you look. As is Tennessee.

The two schools are facing one another for a rare cross-division series in front of a sold-out, 14,000-fan crowd in Oxford. Naturally, Kiffin threw out the first pitch.

On Thursday, prior to the pitch, he hyped up the Tennessee series by using Morgan Wallen’s song about the Knoxville area code.

Wallen replied and mentioned that Tennessee’s football coach is looking for an offensive coordinator, jokingly implying that Kiffin could make the jump east. Kiffin hit him with a golf ball joke.

When it came time to throw the first pitch, Kiffin made another golf ball joke and then threw a strike.

He trolled Tennessee before Ole Miss baseball played Tennessee in a battle of No. 1s. He really did that.

Anyone missing a golf ball? pic.twitter.com/Kb7qXwoGOv

To make things even better, he threw the pitch to Ole Miss’ 6-foot-4, 310-pound defensive tackle who also plays first base, is named Tywone Malone, and MASHES MASSIVE DINGERS.

And then, just for good measure, Kiffin made one more.