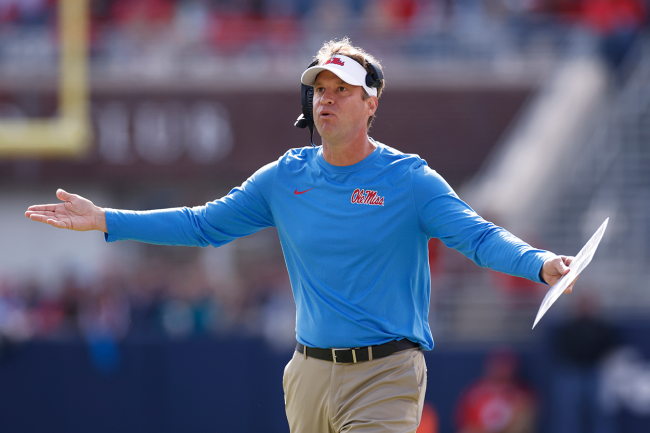 The SEC West rivalry between Lane Kiffin and Brian Kelly has only been a thing for 14 days but it’s already off to a hilarious start. Kelly, who was hired by LSU at the end of November, was involved with a very awkward commitment video and Kiffin, at Ole Miss, could not believe what he saw.

Late on Sunday evening, the Tigers received a commitment from five-star quarterback Walker Howard. Howard, an in-state recruit from Lafayette, was a virtual lock to stay with his commitment to LSU no matter who was hired as head coach.

However, credit to Kelly for doing what he needed to do to get his guy for the future.

His celebration, on the other hand, does not deserve any praise. Kelly could not have been more awkward.

In Howard’s commitment video, he and his future head coach are standing back-to-back on a pedestal as a 360-degree camera circles around them. Howard stands tall and flips a football. Kelly dances an incredibly cringeworthy jig to a Garth Brooks song.

The video, which immediately went viral, caused quite a large reaction. The internet was buzzing with all kinds of jokes.

Among those who couldn’t believe what they just saw was Kiffin. He tweeted a gif in response to the video that showed him shaking his head in disappointment.

Kiffin, who was driving recruits around in his Porsche while Kelly was dancing, would never.