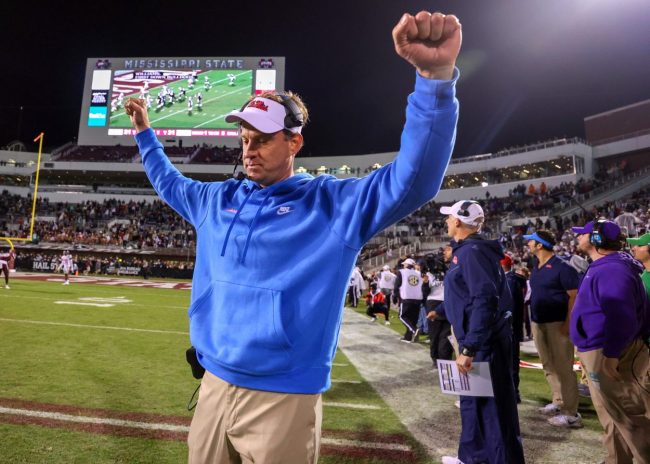 Lane Kiffin is building something special at Ole Miss and is having a lot of fun along the way. The 46-year-old head coach of the Rebels recently signed a lucrative extension to stay in Mississippi and appears to have spent some of the money on a new recruiting tool.

With the early signing period kicking off on Wednesday, the recruiting dead period begins on Monday. From December 13, 2021 to January 13, 2022, it is not permissible to make official or unofficial in-person recruiting contacts or evaluations, on or off campus.

Athletes and coaches are still allowed to communicate by phone, email, social media and other digital communication channels, but they cannot meet with any school face-to-face. Thus, this weekend is a big one in terms of on-campus visits.

Programs around the nation typically host one last “recruiting weekend” before the dead period and early signing period. That was the case in Oxford on Friday, Saturday and Sunday, and quite a few big names were in attendance.

As part of the weekend, Kiffin decided to show off his whip.

Four-star safety Davison Igbinosun shared a quartet of photos on Twitter with Ole Miss’ head coach and his Porsche. Although they inexplicably switched sweatshirts at some point, the shoot made for some iconic recruiting photos.

Former LSU wide receiver Deion Smith recently entered the transfer portal and is likely to sign with Ole Miss. He also posted a photo with his future head coach and his wheels.

Juco linebacker and Ole Miss hard commit Reginald Hughes posted a video of himself in the Porsche, listening to Lil Uzi Vert, while Kiffin is behind the wheel. When the camera cuts to Kiffin, he reminds everyone that he’s throwing a Party In The ‘Sip— a phrase referencing the amount of fun that the Rebels are having as they head to a Sugar Bowl after a 10-2 season in only his second year with the program.

There is not another head coach in the country who can match the swagger. Kiffin’s drip is more like a flood and he is simply uninterested in the haters.