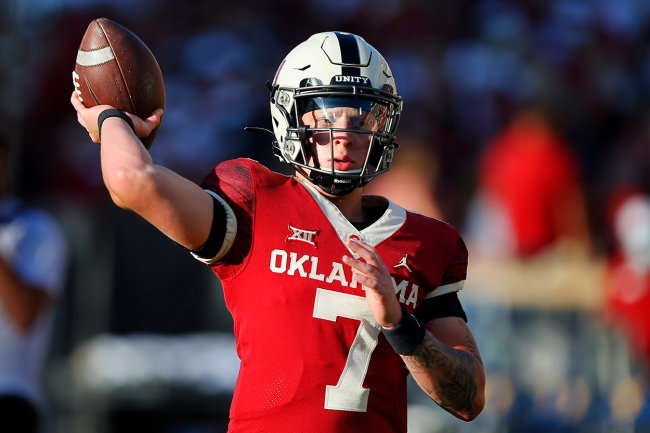 Spencer Rattler is looking for a new home. After entering the transfer portal less than 24 hours after former Oklahoma head coach Lincoln Riley left for USC, the former five-star, No. 1 overall quarterback recruit is in the process of finding the right fit.

The 21-year-old Arizona-native is a redshirt sophomore with three years of eligibility remaining. However, it is expected that his next destination will be a one-year stop where he will try to recoup his draft stock.

Rattler began the 2021 season as a Heisman Trophy candidate. He led the Sooners to eight wins during the COVID-19-shortened 2020 season and capped it off with a dominant Cotton Bowl win over Florida.

After finding success in his first season as the starter, a very different narrative unfolded this season. Rattler was benched in favor of true freshman Caleb Williams against Texas and never regained his starting role. From that point on, it was clear that he would not be playing in Norman next year.

Now it is official.

Despite his difficult year with the Sooners, Rattler showed great maturity in the backup role and solidified himself as a plug-and-play starter with the right program.

Rattler went 15-2 as a starter at Oklahoma, threw for 4,514 yards and 39 touchdowns on 154 completions and threw only 12 picks. A lot of programs in need of a quarterback would welcome him with open arms.

Potential suitors might include UCLA, Miami, Mississippi State, Miami, South Carolina, Florida State and either of the Arizona schools. Chatter is at an all-time high.

After 11 days in the transfer portal, it is clear where Rattler will not be transferring. And if his most recent Twitter followers are any indication, he is headed to the Big Ten.

With that being said, the re-recruitment process is far from over and another prominent program could be making their pitch this weekend. According to On3’s Ben Garrett, Rattler could be in Mississippi for Ole Miss’ final visit weekend of the year.

With the early signing period opening up on Wednesday and National Signing Day less than two months away, the Rebels are hosting quite a few recruits this weekend. Among them are former LSU wide receiver Deion Smith, who entered the transfer portal earlier this week, and Louisville wide receiver Jordan Watkins, who did the same at the end of November.

Rattler would be the icing on the cake, but it is unclear whether he will be in town. Sources indicated to Garrett that it is possible, but “to be determined.”

What that means, likely, is that the offer has been extended.

Ole Miss wants him in town. It is just a matter of if he shows up.

If Rattler does show up, that means his recruitment remains wide open. If he does not, that probably means that he has an idea of where he is headed next.

Current Rebels quarterback Matt Corral will enter the upcoming draft and Ole Miss does not have a clear replacement lined up. Former UCF quarterback Dillon Gabriel has been rumored to be a lock, but a recent change at offensive coordinator could muddy those waters.

Should Rattler choose to join head coach Lane Kiffin in Oxford, he would be the frontrunner for the starting job if Gabriel does not commit. Should they both choose to enroll at Ole Miss, it would be an abundance of riches and a quarterback competition would lead the cream to rise to the top.

No matter who takes over, Rattler or not, he will be stepping into a Top 20 scoring offense in each of the last two seasons. Not a bad place to take over.