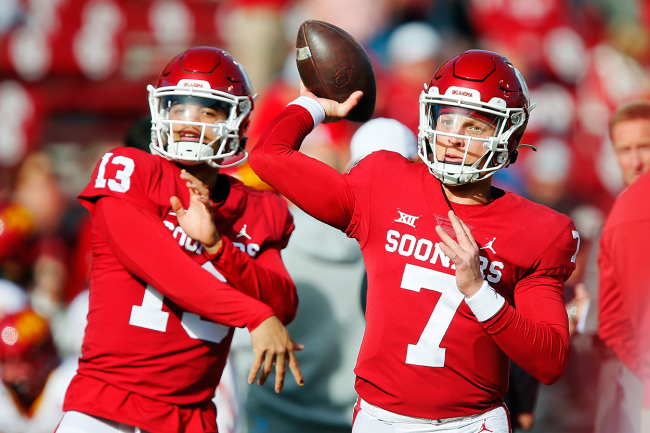 It has been a very difficult year for Spencer Rattler. The preseason Heisman Trophy candidate is now the backup quarterback and all signs point toward him playing anywhere else but Oklahoma next season.

As a former five-star, No. 1 quarterback recruit, there was a lot of hype surrounding Rattler entering the season. There was belief that he could play himself into a first round NFL Draft pick and there was hope that Oklahoma could compete for a national championship.

The former changed quickly during the first few weeks of the season after uninspiring performances against Tulane and Nebraska. And then, during a three-point win over West Virginia, Oklahoma fans chanted for his backup to come in.

Two weeks later, after falling behind early to Texas, Rattler was yanked in favor of Caleb Williams. Williams led the Sooners back from the largest deficit in the rivalry’s history and won the starting job.

First, the 21-year-old had a discouraged reaction to Williams’ success that was likened to his bad attitude in high school. Then, his body language made his feelings very clear during the next week’s game against TCU.

Rattler’s father expressed that his son would not be staying at Oklahoma if he was not playing and his personal quarterback echoed those sentiments. There is a slim chance he stays in Norman.

While all of this was going on, Rattler’s instagram activity made his intentions very clear. It also illuminated his relationships with his teammates.

Questions about his persona ran rampant.

From that point on, over the course of the last month, Rattler has been in the backup role for head coach Lincoln Riley. He has done a great job of keeping his head down and doing what he needs to do.

Rattler has not caused any issues in the public eye, he has not made any controversial remarks, and he has not caused any unnecessary headlines since his instagram bio changes. He knows that, to transfer to another program or even to hear his name called at the NFL Draft, he needs to show that he is not a locker room cancer, as he has often been labeled.

And that is exactly what he has done.

After the quarterback situation became set in stone, Rattler has not tweeted or posted on Instagram. He has seen the field during garbage time, and did not show frustration.

Even last week, after Riley called on Rattler to try and provide a spark in Oklahoma’s first loss of the season, the redshirt sophomore did not bat an eye. He went in, did what was asked of him, did not complain, and did not show his emotions after being pulled again in favor of Williams.

And according to his uncle, Rattler was not even at full health. He did what he needed to do to be on the field.

That was the case again on Saturday when Oklahoma played Iowa State. Williams was the starter, but when his helmet came on and he was forced to sit out a play, Rattler came in.

On his one play of the game, Rattler checked down to the running back for a gain of nine yards— something that he was often criticized for not doing enough.

After filling in for the single snap, Rattler went back to the sideline and did not show any sort of anger or disappointment.

All of this goes to say that Rattler has shown great maturity over the last month. He knows that he will not be with the Sooners next year and is making his case for another program to give him an opportunity.

With the talent and potential that he possesses, there are quite a few programs that would be willing to take a chance. The only concern was his attitude, but he has sured it up in recent weeks and appears ready to take the next step.