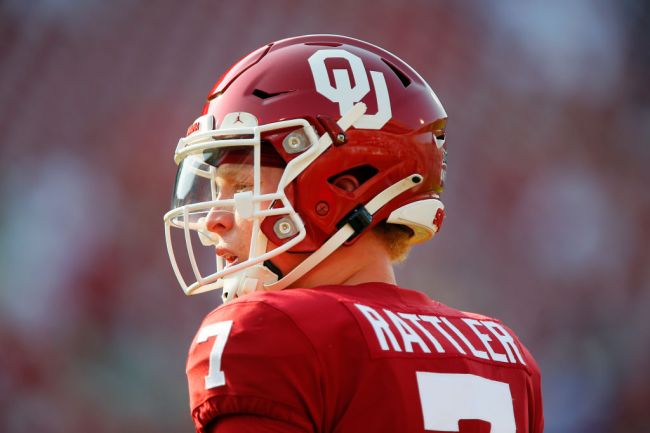 It does not appear that Spencer Rattler will be at Oklahoma beyond this season. The 21-year-old redshirt sophomore was benched over the weekend and all signs point toward him being the backup moving forward.

Rattler, who began the season as a Heisman Trophy favorite, has quickly plummeted back down to earth. During Saturday’s Red River Showdown against Texas, the nation’s former No. 1 overall quarterback recruit struggled out of the gate.

After he committed two early turnovers and his team fell behind by 21 in the first quarter, head coach Lincoln Riley called upon Caleb Williams. Williams, a five-star freshman, scored on his first play from scrimmage and then led the Sooners to the largest comeback in the rivalry’s history.

Rattler was visibly distraught when Williams scored the first touchdown and quickly went to the tunnel while his teammates celebrated on the field after the win. His attitude would imply that he is pretty over his time in Norman.

Earlier this week, after Rattler took the day off from practice on Monday, Oklahoma’s student newspaper got the scoop. By doing some incredible sleuthing with binoculars from a nearby building, The Oklahoma Daily learned that Williams out-snapped Rattler in practice on Tuesday.

Oklahoma’s athletic department responded by shutting down media availability for the week.

In the OU Daily’s report, Mason Young and Austin Curtright also spoke with Rattler’s father Mike. He gave a pretty telling response about his son’s situation.

For starters, Mike hopes that Spencer will earn back the starting job and take the Sooners to the national championship. However, should that not be the case, Mike revealed that there are multiple options on the table.

Rattler could, of course, choose to stay put at Oklahoma, but Mike’s response alluded to a different path. Whether Spencer heads to the NFL or transfers, a betting man would venture to assume that he will not be in crimson and white come next fall.

Here is what Mike said to the OU Daily:

“For right now, he’s focused on working for this team, and we’ll see what happens after Jan. 10,” Mike Rattler said. “Hopefully he’ll be playing in the national championship on Jan. 10, and then after that we’ll evaluate where he is as far as if any teams are interested in him in the NFL, we’ll consider that.

“If we think, ‘Hey, you know what, we may ought to do another year or something at Oklahoma, wherever’… we’re leaving our options open whereas that is concerned, but for the most part, right now, we don’t even talk about it, because he’s got a task at hand to deal with.”

Obviously, Mike doesn’t have any idea what the future holds. And as of right now, neither does his son.

But when you read that quote from Mike, do you not get the sense that if Rattler doesn’t get the starting job back, he will head elsewhere? It certainly seems that way.