Oklahoma Student Newspaper Gets Inside Scoop On QB Situation, Program Then Cancels All Media Availability 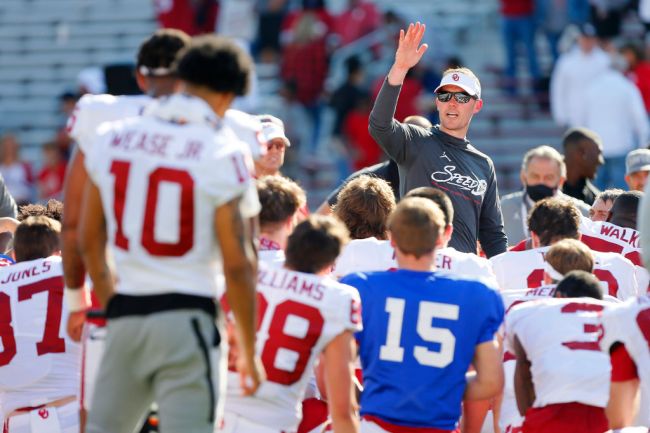 It’s not often in today’s world that student newspapers break any sort of major news, especially at big-time universities like Oklahoma, but that appears to be the case in Norman this week.

On Tuesday, The Oklahoma Daily published a story by Mason Young and Austin Curtright explaining that the publication watched the offensive practice “from a public building.” This seems like no big deal, but the scoop the reporters got is a major scoop.

It’s being reported that the reporter watched from the top of said “public building” and used binoculars to see that Caleb Williams out-snapped Spencer Rattler 15-7 in the pre-stretching portion of practice. The paper also reported that Williams was later seen “primarily scrimmaging” with starting receivers while Rattler threw to backup wide receivers.

Every major sports publication, and especially local outlets in Norman, were trying to determine who would be the starter for the Sooners moving forward and it was the student newspaper that got the info.

Rattler, a preseason Heisman Trophy favorite, was benched during Oklahoma’s win against Texas while Williams, a true freshman, pushed the Sooners to victory.

Hats Off To The Student Newspaper

Not only is the story itself unbelievable, but the fact that the reporter allegedly got on the roof of some building to essentially spy on practice with binoculars just adds to the awesomeness of this whole thing.

What isn’t so awesome about this whole situation is Oklahoma’s response. Lincoln Riley and the Sooners abruptly canceled all of its media availabilities for the rest of the week on Wednesday, the day after the student newspaper story was published. The program hasn’t given a reason for the media blackout, but it’s easy to put two and two together here.

Congratulations to the student newspaper for busting it and getting this story, that’s some serious journalism-ing right there.