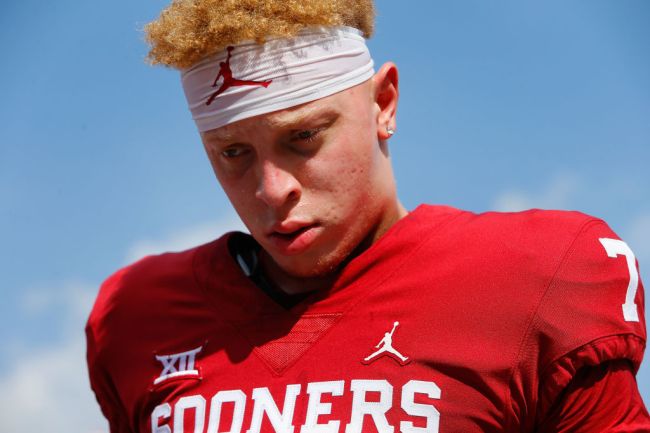 A few weeks ago, the No. 1 quarterback in the class of 2019 was booed by his own fanbase as they chanted for his backup to come into the game. A few weeks later, on Saturday, Oklahoma fans got their wish.

Through the first quarter of this year’s Red River Showdown, Rattler went 8-for-15 with 111 yards, an interception and a fumble. The Sooners found themselves losing 28-7.

Facing a 4th-and-1 to begin the second quarter, head coach Lincoln Riley called on backup quarterback Caleb Williams. Williams came to Oklahoma as the consensus No. 1 quarterback recruit in the class of 2021 so it wasn’t that crazy of a move.

In fact, it wasn’t crazy at all. It was the right one.

Williams didn’t just get one yard, he got 65 more and scored. Watch Rattler’s reaction:

In response to the touchdown, Oklahoma’s entire sideline and fanbase went bonkers. Except one person — Rattler.

The clip was loosely reminiscent of Rattler’s bad attitude in high school.

A clip from the television series ‘QB1: Beyond The Lights’ shows him competing against his backup JD Johnson in 2018.

Although he was just a high schooler messing around, Rattler wasn’t particularly pleasant. Nor did he come across as a positive addition to the locker room as a leader or a teammate.

As fate would have it, Rattler did not see the field for the rest of the game on Saturday. Williams, his replacement, pulled off the largest comeback in the history of the Red River Showdown and beat Texas 55-48 on a walk-off touchdown.

After the game, Riley and his wife celebrated with Williams and Rattler was nowhere to be found.

Caleb Williams getting hugs from Lincoln Riley and his wife lmao Spencer rattler gonna have to transfer pic.twitter.com/LuSzA9wPuy

Rattler’s first quarter against Texas might be the last time we see him in an Oklahoma uniform. What a brutal way to go out.