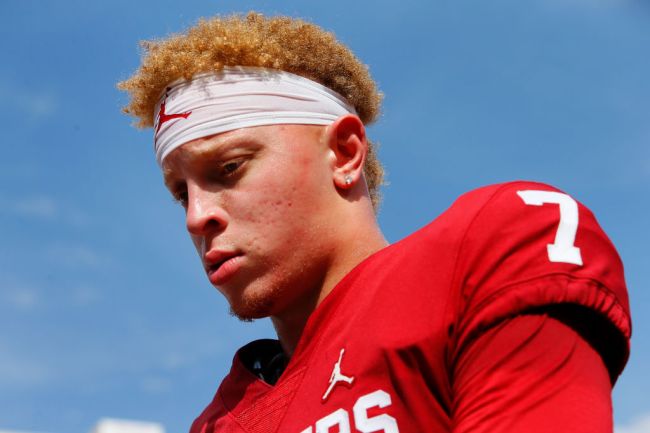 When Spencer Rattler was benched against Texas in 2020, head coach Lincoln Riley’s decision to go to the back up was temporary. That does not seem to be the case after it happened again in 2021.

Last year, Rattler committed two early turnovers against the Longhorns and was benched in favor of Tanner Mordecai. However, he re-entered the game in the second half and led the Sooners to an epic, four-overtime win.

On Saturday, the preseason Heisman Trophy favorite was again pulled from the game after two early turnovers. Riley tapped true freshman and five-star recruit Caleb Williams in his place.

Williams scored on his first play from scrimmage and Rattler’s reaction to the score was extremely telling. As opposed to 2020, Rattler did not return to the game and Williams led Texas back from the largest deficit in Red River Showdown history to win 55-48.

After the game, the Sooners celebrated all over the field and took a team photo giving the “Horns Down.”

There is one notable player absent from the photo— Rattler.

After the clock hit zero, Rattler went straight to the locker room by himself. He was nowhere to be found as his teammates soaked in the moment.

At 3:07 p.m. CT Oklahoma’s sideline exploded onto the field and planted the team flag at midfield. Five minutes later, Rattler was on his way into the tunnel.

Riley was asked about the quarterback position moving forward after the win and he said that he was not ready to name a starter moving forward. But it’s hard to imagine that Rattler will get the nod after such an impressive comeback from Williams.

Based on Rattler’s attitude, it is pretty clear what he thinks about the situation. He did come out and tweet his support for his teammates on Sunday after the win, but it certainly felt like a classic case of “too little, too late.”

Huge team win yesterday. Proud of all my brothers. 6-0!

It will be interesting to see who Riley gives the ball on Saturday against a good TCU program. If Rattler is not under center, it would be hard to imagine him staying in Norman beyond this season.