Spencer Rattler’s Uncle Reveals How The Oklahoma QB Was Not At Full Health Vs. Baylor 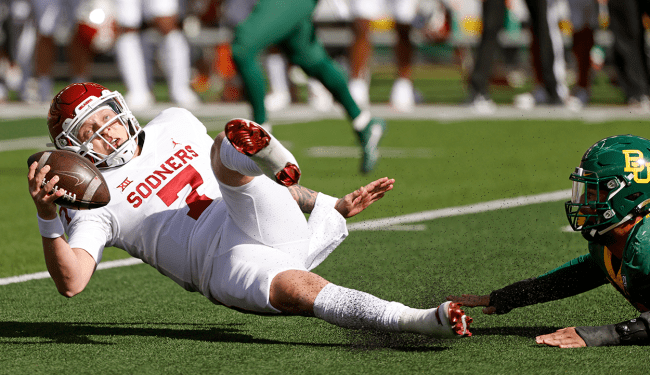 The quarterback situation at Oklahoma could not be more chaotic. Spencer Rattler was named a Heisman Trophy candidate before the season, earned the starting job and won four of his first five games by a touchdown or less.

Now he’s likely on his way out.

As a result, after throwing two early interceptions, Rattler got yanked in the Red River Shootout. True freshman Caleb Williams stepped in, led the largest comeback in the rivalry’s history, reinvigorated the entire program and its fanbase, and was immediately listed as a Heisman candidate.

Now, four weeks later, neither quarterback has a chance at New York.

Over the weekend, with Williams as the starter, Oklahoma fell behind 10-3 to Baylor. And then, in an unexpected move, head coach Lincoln Riley went back to Rattler.

“I was looking for a little bit of a spark,” he said after the game. “Spencer had had a good week, and I’ve told you guys I feel like I’ve got a tremendous room there. And so I went with Spencer. And again, you’ve got to make those decisions in the heat of the moment (and) at that point I felt like it was the right decision.”

Rattler came in, could not get anything going, went 4-of-6 for 36 yards, and was replaced on the next drive. Riley tapped Williams once again.

As a result, it certainly seems like Rattler will not be with the Sooners next season. His father had already made that clear, his personal quarterback coach said it verbatim, and the presumptive understand is that he will transfer.

After the loss to the Bears, Rattler did not comment on the game. He did not post on social media and was not made available for comments.

His uncle, however, revealed that his nephew was not of full health. Per Scott Konkel, Rattler played through the flu.

“FYI, Spencer was diagnosed with the flu the morning before the game and still suited up!”

Rattler’s illness was not reported prior to the game, Konkel received the news from his sister.

The flu thing was not made public. That was reported by me after talking to his parents yesterday during the game.

Konkel is the brother of Susan Konkel, Mike Rattler’s wife and Spencer’s mother. He posted about Rattler ahead of last year’s Peach Bowl, calling him “his nephew.”

Regardless of his health status, Rattler could not provide the spark Riley was looking for. As a result, he was re-benched, which more than likely sealed his fate with the Sooners program.