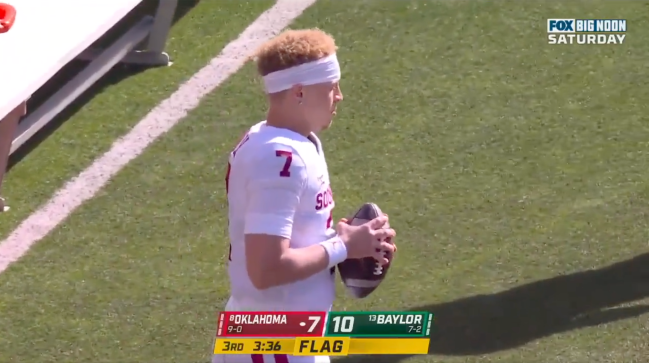 The quarterback position at the University of Oklahoma has been an absolute rollercoaster and that was no exception on Saturday. When the Sooners fell behind 10-7 to Baylor, head coach Lincoln Riley sent Caleb Williams to the bench and turned back to Spencer Rattler.

What a turn of events! Just when it seemed like Rattler was all-but checked out, he gets thrown into the biggest game of the year with a deficit to overcome.

As a former five-star, No. 1 quarterback recruit, Rattler began the year as a Heisman Trophy frontrunner. His stock quickly dropped during unimpressive performances against Tulane and Nebraska in the first three weeks of the season.

In the following week, a three-point win over West Virginia, Oklahoma fans chanted for his backup to come in. Williams, a five-star recruit in the class of 2021, got his shot two weeks later against Texas.

After Rattler threw two early interceptions against the Longhorns, Williams came in to lead the Sooners back from the largest deficit in Red River Shoutout history. He was a hero in Norman.

The 21-year-old’s reaction to Williams’ success made his frustration very clear. A week later against TCU, Rattler’s body language said everything that you needed to know about how he was feeling.

His father even expressed that his son would likely not be staying at Oklahoma if he was not playing.

Soon thereafter, Rattler made a change to his instagram bio that made his future career intentions very clear. The list of people that he follows on the social media site also defined exactly how just how distant his relationship with Williams really is.

And then, against Kansas, Williams did not play particularly well and the Jayhawks nearly pulled off an unprecedented upset. Everybody was talking about the potential of Rattler re-entering the lineup. He did not.

The Arizona-native did, however, receive garbage time reps against Texas Tech in the following week and went 5-for-5 with a touchdown.

Despite his late-game playing time, Rattler’s personal quarterback coach made things very clear. He will not be at Oklahoma next season.

With all of this having played out how it did, the Sooners still remained undefeated and a top-four team. They controlled their own destiny if they could beat three, if not potentially two, of their three remaining, difficult, opponents: No. 13 Baylor, Iowa State and No. 10 Oklahoma State.

During Saturday’s game against Baylor, Williams was the starting quarterback. Rattler was the backup.

Although he had his hand stepped on, which may have factored into his performance, he just didn’t play well. Williams went 8-of-17 for 84 yards, no touchdowns and two interceptions through the majority of the first three quarters.

It was then that the tables turned.

Rattler began to warmup on the sideline and the fans who chanted for his benching just six weeks prior chanted for him to get in the game.

Unfortunately for Riley, his quarterback change was not the difference.

Doesn't matter who's in at QB for Oklahoma, @BUFootball's defense is getting after it 😤 pic.twitter.com/wSB04GwtPX

After going 4-for-6 for 36 yards, Rattler was replaced by Williams with less than four minutes remaining. At that point, the Sooners were down 21.

Williams came back in and tried to spark a rally, but Oklahoma went on to lose its first game of the season, likely eliminating them from College Football Playoff contention unless chaos occurs in the remaining two weeks of the regular season.

Perhaps more importantly for the immediate future in Norman, Riley appears to have made a definitive, final decision at the position. Williams is the guy.

Any glimmer of opportunity for Rattler to earn his way back into the starting lineup for a late playoff push has dulled and his fate appears to be sealed. He will not be with Oklahoma next year.