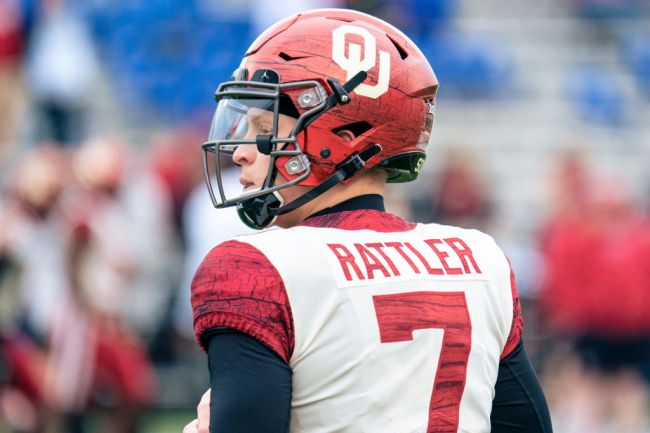 Oklahoma quarterback Spencer Rattler is on his way out of Norman at the end of the 2021 season. The chances of him staying with the Sooners are slim to none.

Rattler, who was the No. 1 quarterback in his recruiting class, has not lived up to expectations. He was booed by his own fans early in the season, benched against Texas, and has not seen the field but for “garbage time” since.

In his place, true freshman Caleb Williams has not even left the door cracked. Rattler will not start another game at Oklahoma, barring injury, and will be the backup so long as he stays with the program.

Rattler has not showed much desire to be there while on the sideline, and his activity on Instagram is very telling about his relationship with Williams. And, based on a change to Rattler’s instagram bio a few weeks ago, and comments from his father, he wants out.

Recently, his personal QB coach made his exit not an if but a when and where.

Mike Giovando, who has worked with Rattler since the sixth grade, remains one of his closest confidants. He spoke with AZ Central and shared exactly what we already knew.

This time, it’s official and definitive.

“Of course he’s not going to be there after this year,” he said. “I mean that’s a no-brainer.”

Giovando also echoed Rattler’s father in that the move could be to another school, or that he might declare for the NFL Draft.

“Whether or not we declare for the draft or find another school remains to be seen,” he said. “We just want to keep getting feedback from where he may fall in the draft. And his number one goal is to be a first-round pick one day, so he will do what’s best in the end so he can achieve that goal.”

As of right now, Rattler’s NFL stock is not particularly high. He has been benched at Oklahoma and attitude questions loom.

While this news comes as no surprise, Giovando’s comments are the first time that we are hearing on the record Rattler will 100% not be at Oklahoma next year.