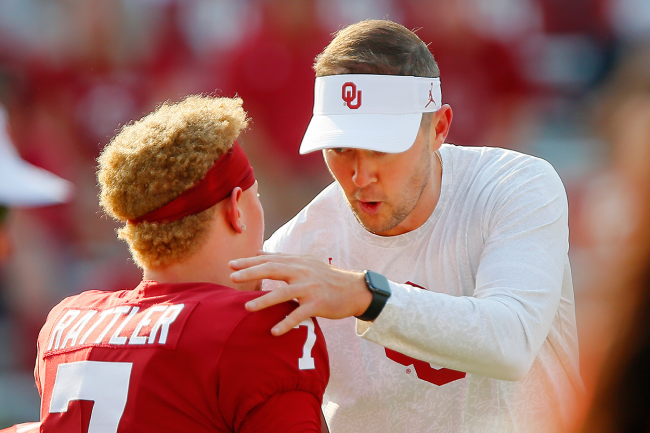 Spencer Rattler was not expected to be in Norman next year. However, after Lincoln Riley reportedly accepted the USC head coaching job, could that change?

Rattler, who is a redshirt sophomore, has three years of eligibility left. He began the year as the starting quarterback at Oklahoma and finished as the backup headed out.

As a former five-star, No. 1 quarterback recruit, Rattler has a lot of talent. There is no denying his potential, he just needs to put it all together.

The right fit with the right school and the right coach could make that happen. And if his father’s comments earlier this year, or his personal quarterback coach’s guarantee are to be taken as truth, Rattler is looking for that fit.

After Oklahoma’s regular season ended on Saturday with a loss to Oklahoma State, Rattler watch is officially on. He could hit the transfer portal any day now.

OR— because of the upcoming coaching change, Rattler may choose to stay. The Sooners have to make a significant hire to stay relevant with the move to the SEC on the horizon and he could choose to stay and compete with Williams (who says he is staying) for the starting job.

I appreciate all the concerns about the situation but I am also happy for Coach Riley, mama Riley, Sloan and Stella for that huge opportunity ahead. That’s all I plan to say right now! #boomer

OR— Williams could follow Riley to USC and Rattler would be the favorite for the starting job.

OR — Williams could not like the coaching hire, transfer, and Rattler would be the favorite for the starting job.

The possibilities are endless.

It is easy to assume that Rattler is probably won his way out, but is it as fun? The internet is always a chaotic, wildly entertaining place after breaking news, and Riley’s move was no exception. People were going crazy.

That was also the case in regard to Rattler. Here are some of the best and craziest theories, jokes, and the rest:

“We’ll be back next year. Don’t even worry, coach!”

Lincoln Riley never bought into Caleb Williams (blew the season by yanking him at Baylor) and obviously wanted no part of having to compete in the SEC. So he bolts for USC – great for the Trojans. Wonder if he'll try to convince Spencer Rattler to go with him?

Spencer Rattler about to enter that transfer portal to USC so he can go be mid in LA. That NIL money doesn’t go that far there, my dude.

After all this, Spencer Rattler is going to be your Oklahoma Starter week 1.

Now we just need Spencer Rattler to transfer to UCLA

What were the chances that Lincoln Riley would enter the transfer portal before Spencer Rattler? Man, I'm telling you…this CFB season has been nothing short of amazing.

Can we get Spencer Rattler to USC Stefan Djordjevic style

Lincoln Riley telling Spencer rattler he’ll have to spend a year at Compton community college before coming to usc with him pic.twitter.com/PkAyXenmey

Lincoln Riley when Spencer Rattler broaches the idea of transferring to USC pic.twitter.com/p0TuNRInWu