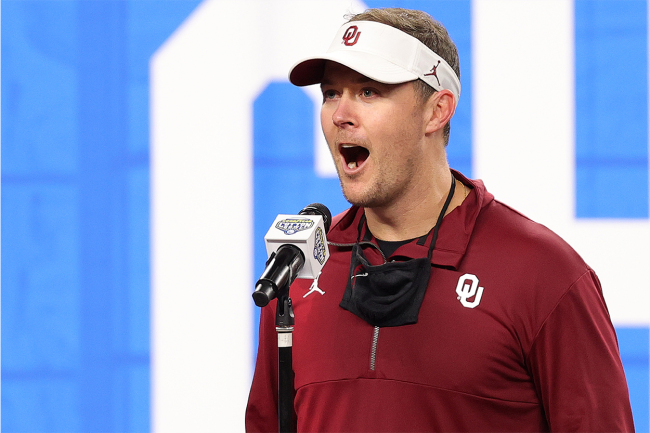 On Saturday night, after losing to Oklahoma State, Oklahoma head coach Lincoln Riley said definitively that he was not taking the LSU job. He did not lie.

Less than 24 hours after his fifth regular season with the Sooners came to a close, he is reportedly headed to Los Angeles. Per multiple reports, Riley accepted the head coaching position at the University of Southern California.

BREAKING: Lincoln Riley is leaving OU to become the new head coach at USC, per sources. It is happening. HUGE get for the Trojans and the Pac-12. https://t.co/4008Dl0IR2 https://t.co/jYk68PrEzp

Terms are not yet released, but they are set to be pretty substantial. Riley’s annual salary in Norman stood at $7.672 million.

Riley was the fifth-highest paid coach in college football in October, and based on the current climate, Riley is in a position to negotiate significantly more than $8 million per year to coach the Trojans. He could very easily become the second-highest paid coach in the nation if his representation does their job well.

Finances aside, one of the best offensive minds in college football is headed West. Although it is important not to declare a hire a guaranteed home run right away, should this not work out, coaches should just be hired through a lottery system.

As the news broke on Sunday afternoon, the internet collectively had its head explode.

At first, it was just speculation. And then boom. It was done. Riley to USC.

Reactions to the news were all across the board. Some people were thrilled, others were furious, most were baffled.

Here is some of what college football fans and analysts were thinking after the news broke:

Can't imagine why Lincoln Riley would rather recruit against UCLA, Cal, Stanford, and Arizona State than Alabama, Georgia, Florida, and Texas

USC while everyone is tossing around Lincoln Riley to LSU rumors pic.twitter.com/fTZmCoW8VW

Would love to know what he would have said if the followup question had been “What about USC?”

“Lincoln Riley to USC is a grand slam.”

Lincoln Riley to USC, big hire for the Trojans. But Riley turns down LSU and bails on Oklahoma right as they join the SEC? Looks like somebody is scared of competing in the SEC.

I’m fine with Lincoln Riley leaving. He reached his ceiling at OU, most of his success was with Bob Stoop’s players. Wasn’t going to be mad if he took the LSU job.

With that being said, have fun playing in front of this crowd every week Coach. It’s been a pleasure. pic.twitter.com/4Rb3L1uAFa

LA is lit up in red and white to welcome Lincoln Riley from Oklahoma to USC pic.twitter.com/q2a3n948uZ

Lincoln Riley to LSU would have changed the SEC

You really have to wonder if OU moving to the SEC cost it Lincoln Riley, at least in part.

USC now provides a much easier annual path to the playoff + better natural recruiting grounds. It's a shocking move, but it makes sense on paper.

Matt Leinart on Lincoln Riley coming to USC: "We are back!"

Oklahoma is heading to the SEC

Top priority for Lincoln Riley at @USC_FB needs to be convincing homegrown California QB talent to stay on the west coast. Local LA kids like Matt Corral, D.J. Uiagalelei, & Bryce Young must buy USC as a viable path to the NFL. The mass QB exodus must stop.

USC IS SO BACK

Should we build the statue now or wait six months? #USC https://t.co/wdYVu9qKEE

What a hire! USC needed to make a big splash after years of complacency and irrelevance, and boom— Lincoln Riley.

Athletic director Mike Bohn, who decided to keep Clay Helton a year ago, understood the assignment. Wow. What a day.