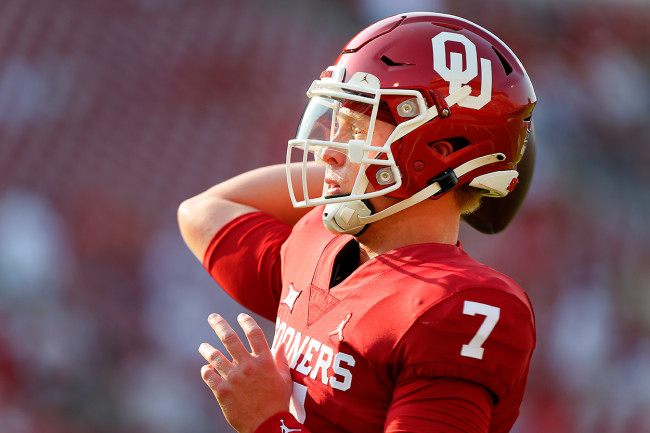 It has been a topsy-turvy, up-and-down season for Spencer Rattler. After beginning the year as a Heisman Trophy candidate quarterback at Oklahoma, the Arizona-native is almost certainly on his way out of Norman.

However, the Sooners’ final regular season statistics includes an interesting wrinkle that makes his future as a viable starter at a Power-5 program a reality.

As a former five-star, No. 1 quarterback recruit, Rattler’s options are plentiful. He began the year with a lot of hype and a belief that he could play himself into a first round NFL Draft pick. More importantly, in the immediate future, Lincoln Riley and his team had national title hopes.

Neither of those things have come to fruition.

Rattler was relatively uninspiring in early-season wins against Tulane and Nebraska. And then Oklahoma fans chanted for his backup to get into the game during a three-point win over West Virginia. Two weeks later, after early interceptions against Texas, the redshirt sophomore was pulled in favor of Caleb Williams.

Williams proceeded to lead the Sooners back to a Red River Shootout win and, in turn, won the starting job. Rattler was visibly discouraged as Williams led the comeback and won the following week’s game against TCU.

Since then, Rattler’s father expressed that his son would not be staying in Norman and his personal quarterback coach said the same. More than likely, Rattler will not be at Oklahoma next year.

After attitude concerns were something of an issue during high school and earlier this year, Rattler has been dedicated. He played through a flu bug against Baylor and has shown great maturity.

Now that Oklahoma’s regular season has come to a close, the clock begins to tick on Rattler’s future. At this point, it’s less of an if he will enter the transfer portal, but a when. And then, of course, it’s a question of where he will go.

Wherever he ends up, Rattler is still a viable QB1 at a Power Five conference program.

He played in only nine games this season, four and a half as the starter, and still led the Sooners in passing.

Sure, Williams may have scored more touchdowns both on the ground and through the air, but he also suffered two losses to Rattler’s undefeated season. Rattler still threw the ball more, more efficiently, and for more yardage.

The fact that he finished the regular season as the team’s leading passer despite getting benched in Week 6 speaks wonders about Rattler’s talent. Despite his poor start and riding the bench, there is a lot of potential with the 6-foot-1, 200-pound pro-style quarterback who can also make things happen with his legs.

When Rattler decides to transfer, he will have a lot of opportunity. Of the programs that might make sense for him, UCLA, Mississippi State, Miami, Arizona State and Tennessee could be viable options. All five programs need a signal-caller, along with many others, and Rattler is an immediate plug-and-play.

With two losses, Oklahoma will not play in the Big 12 Championship. It will also miss out on the College Football Playoff. Depending on where the Sooners end up, Rattler could either wait until after the bowl game to make his next move or could enter the portal as soon as tomorrow.