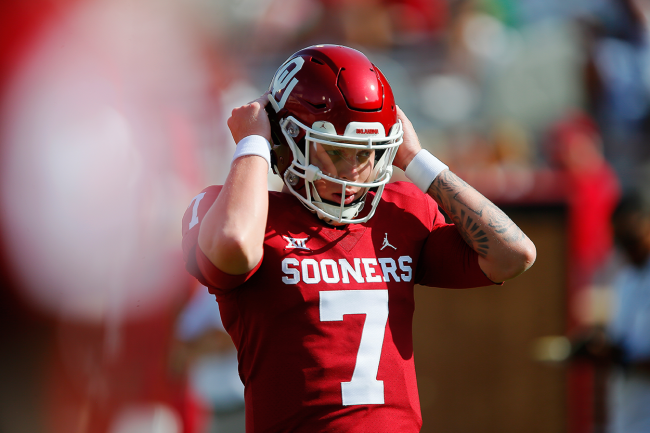 Less than 24 hours after Oklahoma head coach Lincoln Riley accepted the head coaching job at USC, one of his former quarterbacks announced the he too will be leaving. Spencer Rattler, who began the year as a Heisman favorite, is officially entering the transfer portal.

This news comes as no surprise. The writing has been on the wall for months.

However, now there is no more speculation.

Of the schools that might make sense for Rattler’s future, UCLA, Mississippi State, Miami, Tennessee and Ole Miss are among them. In addition, Florida State, South Carolina, and his home-state schools of Arizona and Arizona State also might make sense.

There is also the off-chance that Rattler could follow Riley to USC. However, after the way that Riley handled Rattler’s benching in Norman, it does not seem likely. But it is not out of the realm of possibility.

Wherever Rattler ends up, he is still a viable starter at a Power Five conference school. Over the course of three years, the Arizona-native played in 23 games and won 14 of 16 games as a starter.

Prior to his time at Oklahoma, Rattler was a five-star recruit and the No. 1 quarterback prospect in his class. It’s safe to say that there would be quite a few programs who welcome him, despite some of his character concerns.

Rattler’s time with the Sooners was rather unique. His redshirt freshman season ended on a high note with a dominant Cotton Bowl win over No. 7 Florida.

He entered his third year with the program as the incumbent starter and carried a lot of promise on his shoulders. It was expected that he would be in the conversation for the Heisman Trophy and that Oklahoma would be in College Football Playoff contention.

The latter was true until Saturday, but the former was quickly silenced after he was benched during a comeback win over Texas.

Rattler came out and struggled early against the Longhorns. As a result, five-star freshman Caleb Williams entered the game and led the largest comeback in Red River Shootout history.

From that point forward, Rattler was the backup.

After getting benched, both his father and personal quarterback coach suggested that he would not be at Oklahoma beyond 2021. Since that day on, Rattler showed a lot of maturity in his second-string role.

He even reportedly played through the flu against Baylor and got a chance (but failed) to spark a second-half comeback against the Bears. Rattler wanted to be on the field but Riley did not allow him that opportunity.

As a result, Rattler is looking for that chance elsewhere. It is official.