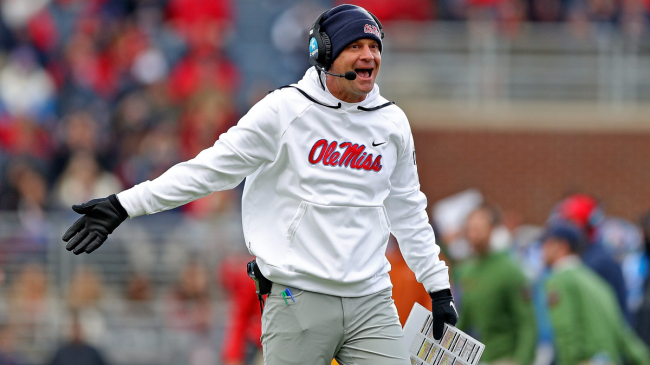 Lane Kiffin is making headlines this Monday night as his uncertainty at Ole Miss continues to grow.

Over the last few weeks, the head coach has been rumored to be Auburn’s top target following the program’s firing of Bryan Harsin. While he’s remained mum on his future, reports are beginning to surface saying that his leaving Oxford is a done deal. This coming despite Ole Miss’s best attempts to keep him with a high-paying contract offer.

News broke Monday night saying that Kiffin would be stepping down as the Ole Miss leader on Friday following the Egg Bowl with plans to accept the same role for the SEC West rival. That report was broken by Mississippi news correspondent Jon Sokoloff, who posted the following message on Twitter.

BREAKING: Ole Miss HC Lane Kiffin plans to step down as the Rebels coach Friday and head to Auburn to become the Tigers next head coach, according to sources.

Sources say the Tigers haven’t officially offered the job to anyone yet.

So, Lane to Auburn is happening. Story soon.

Kiffin responded to the breaking report by saying, “That’s news to me,” sarcastically brushing off the rumors and keeping the focus on Ole Miss.

He then took things a step further, absolutely bodying Sokoloff for spewing the alleged misinformation.

Lane Kiffin took a shot at the reporter for making the false claim about his future.

And he did so in the most hilarious way possible. He copied and pasted the tweet that Sokoloff posted, swapping out his own name and profession for that of the reporter.

The hysterical jab shut down the talks for now.

Despite the apparent denial of his leaving Ole Miss, Kiffin’s name will continue to be tied to the Auburn job until a decision is made. With the Rebels’ regular season ending on Thursday, we could know that answer soon.