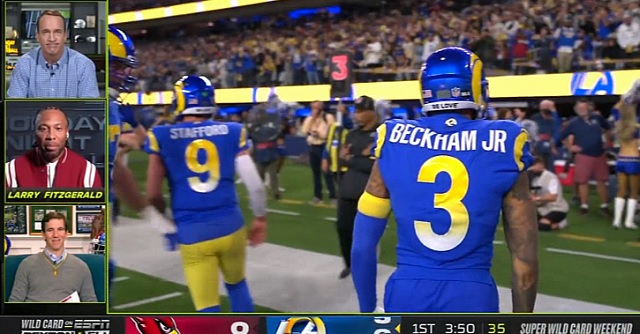 On Monday, Fitzgerald joined Peyton and Eli Manning for the Manningcast of the Cardinals-Rams playoff game. During his appearance, Fitzgerald broke down how the Rams were utilizing Beckham Jr. in the red zone this season.

“I love how they’re utilizing him in the red zone, he’s such a threat with his lateral quickness and his ability to go up high point a football, and with his catch radius, he has one of the best catch radius’s in the game.”

Larry Fitzgerald points out how well the Rams are utilizing Odell Beckham in the red zone…few minutes later Odell scored exactly how Fitzgerald talked about pic.twitter.com/7ubx2jmlPx

Exactly, high-pointed it, that’s what Odell is so capable of doing, I’m glad to see him playing at this level.