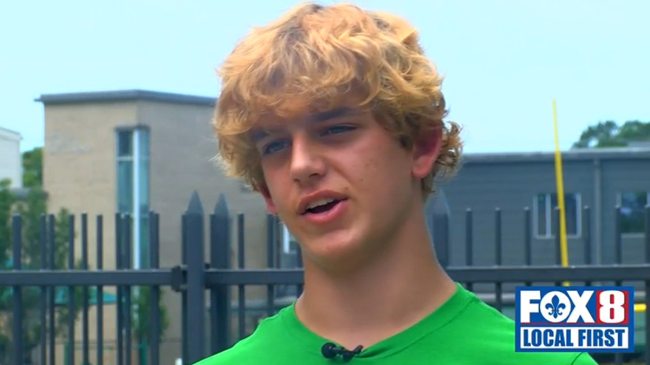 Arch Manning is the No. 1 high school football recruit in the class of 2023. As the son of Cooper, nephew of Eli and Peyton, and grandson of Archie, he can go wherever in the country that he wants.

With that being said, Manning will ultimately have to decide on one institute of higher learning to continue his football career prior to February 1, 2023. As such, a few schools are believed to be most prominently in the mix.

Georgia, Texas, Alabama, Clemson and Ole Miss are considered to be his top five, in no particular order. LSU, SMU, Tennessee and Notre Dame are considered long shots.

However, after a leaked video surfaced on Friday, perhaps his decision has been made?

Manning does not have any social media. He chooses not to deal with the outside noise and likes it that way. Thus, to get a video beyond his standard game and practice coverage is rare.

One of those recent rarities showed Manning hanging out with a blonde girl. Manning is stretched out on a couch while the young lady sits next to him on the floor.

She asks into the camera “Arch Manning is coming to Ole Miss, right?”

Now, there is no context here. Zero. Manning also appears to have a healthy hint of sarcasm/exaggeration in his voice, doing it for the bit.

But what if he isn’t?

Despite every effort, I could not figure out who she is or how she knows Manning. It is also unclear when and where the video was filmed— although Manning looks the same as he does now so it was fairly recent.

Perhaps it was filmed during Ole Miss’ Egg Bowl route of Mississippi State? Perhaps she is part of the Thanksgiving table?

Obviously, there is a lot of of uncertainty here.

Regardless of who she is, how he said it, or why the video was filmed, for Arch to even take part in this video makes it clear that Ole Miss is at the very least heavily in the mix.