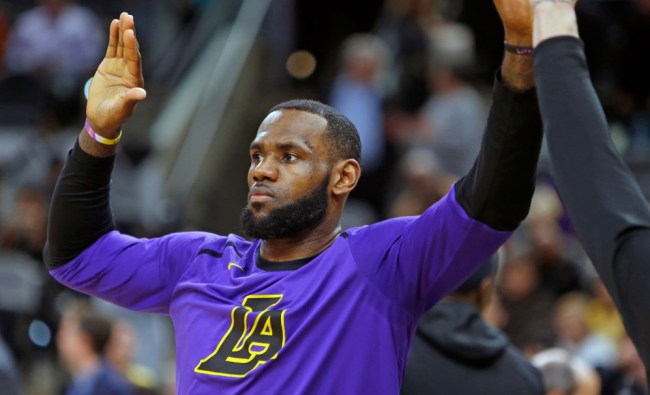 The older LeBron James gets, the more self-aware he seems to get. Unlike many athletes who achieve outlandish fame, James appears to grasp how big an influence he can have on the lives of people far less fortunate than him.

He understands that even the little things done by a man of his stature mean a lot to those who look up to him.

Which is why he made a 23-year-old Memphis Grizzlies assistant equipment manager’s day/year when he gave her his game-worn shoes after Saturday night’s game.

Late in Los Angeles’ 111-88 win in Memphis, LeBron had his bodyguard call over Grizzlies’ assistant equipment manager, Brian’e Miller, to the Lakers bench. Little did she know what was about to happen.

As she was picking up another player’s gear, LeBron gave her his game-worn sneakers and a hug.

After the game, he explained why.

“Every year I’ve come here, she’s always worn a very exclusive pair of my shoes and I’ve always noticed it and I’ve never said anything to her,” James explained. “And tonight, I said something to her for the first time and she was like, ‘Yeah, I’ve always been Team LeBron. Always.’ So she got a pair of LeBrons.”

As NBA.com points out, LeBron spent 15 seasons in the Eastern Conference, so he only played in Memphis once a year. Yet, he still noticed Miller’s allegiance to him in her choice of footwear. That is some serious court awareness.

Then, just to top things off, James also gave his armband to a boy sitting behind the Lakers’ bench, and stopped to give his sleeve to another young fan as he headed to the locker room.

Thank you for restoring at least a little of our faith in humanity, King.