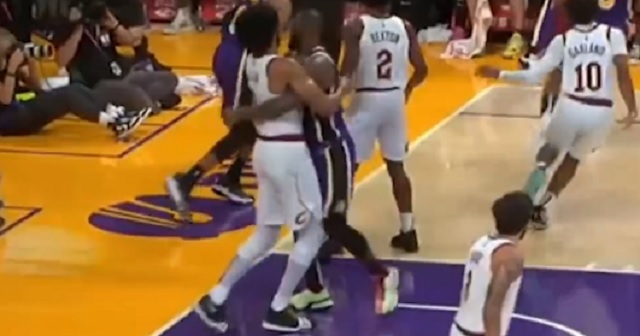 NBA fans always hate when LeBron James gets superstar calls but it seems like their annoyance with the refs is justified this time around.

During Friday night’s Cavs-Lakers game, LeBron was seen deliberately hugging Cavs’ Jarrett Allen under the basket during a play. Moments later Allen was somehow called for a foul despite being held down by LeBron for several seconds.

Fans were absolutely livid at the foul call on Allen.

This is why the @NBA is garbage https://t.co/hPvb1FcUDe

Funny? Its pathetic. And that referee should be fired for buying it. https://t.co/9sgFJ7Jsix

He's an amazing player, why does he have do this shit so often? https://t.co/F0H8oLhaO9

Here's the play… lol. Allen gets called for what I assume is the classic "get bearhugged so it's a foul on you and free throws" call https://t.co/xx6erxTAgS

This clip is why I stopped watching basketball https://t.co/lDLChNO6Ja