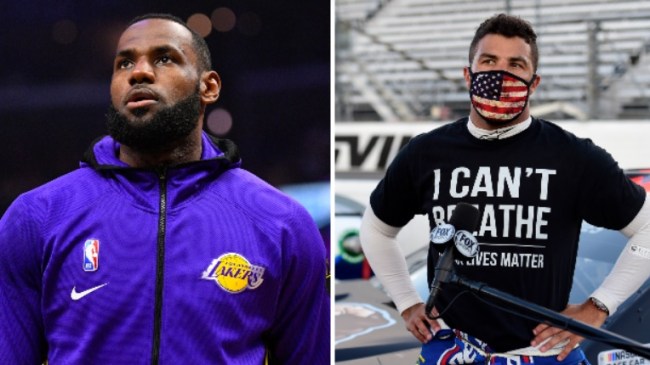 LeBron James has chimed in on the Bubba Wallace noose situation.

On Thursday afternoon, NASCAR released the photo of the “noose” that was found in Wallace’s garage on Sunday which has since been determined by the FBI to be a “garage pull.

On Thursday LeBron tweeted his agreement with a segment from ESPN’s Jalen & Jacoby in which Jalen Rose and Dave Jacoby agreed that the photo proved there was a noose in Wallace’s garage and the FBI should have considered it a hate crime even if it wasn’t specifically targetted at Wallace.

Jalen Rose: I don’t know why they don’t consider it a crime but either way it’s still hate and yes it probably wasn’t there specifically for Bubba Wallace because allegedly we didn’t know what garage he was going to be in but it doesn’t make it better that it has been there for a year.

Dave Jacoby: I think the FBI is right that this wasn’t specifically a hate crime against Bubba Wallace, I think it’s actually worse, I think this is a hate crime against all black people that has been seen over and over again since October 2019 and it took this long for someone and say something. I’ve seen a lot of ropes to pull down garage doors…I have never ever ever seen a noose.