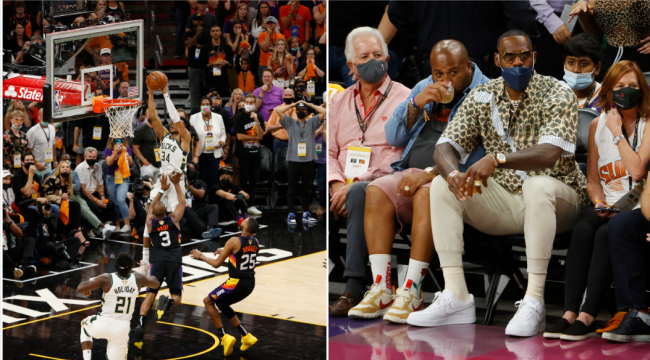 On Saturday night, LeBron made his way to Phoenix to support his best friend Chris Paul during game 5 of the NBA Finals.

LeBron pulled up to Game 5 🔥 pic.twitter.com/qVIcuH1RDf

Late in the fourth quarter with 22 seconds in the game, Jrue Holiday stole the ball from Devin Booker which led to Giannis converting an alley-oop dunk on CP3.

Unfortunately for LeBron he was featured in the background of the picture that showed Giannis dunking on CP3.

If the Bucks win the NBA Finals this pic with LeBron James in the background of the Giannis dunk will be iconic https://t.co/wollOi8jFf

LeBron with a front-row seat for the Giannis alley-oop. pic.twitter.com/xgtMwLCIOE

iconic photo. Bron in the back and everything https://t.co/squu7mne1C

Lebron being forced to watch CP3 get dunked on by the Greek pic.twitter.com/bVCwp9m1WI