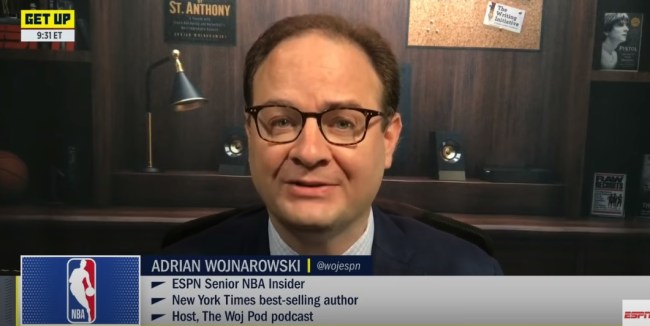 NBA insider Adrian Wojnarowski is getting some love from several prominent NBA players around the league.

On Saturday night, Wojnaroski was suspended by ESPN after he sent a “fuck you” email to Missouri Senator Josh Hawley on Friday for asking questions about why the NBA didn’t allow anti-China or pro-police messages on jerseys during the NBA restart.

NEWS: Woj's suspension is for two weeks, according to sources.https://t.co/NRSkNx6OyG

ESPN has scrapped NBA insider Adrian Wojnarowski’s trip to Orlando this week to report from the NBA bubble, according to sources, after he responded to Sen. Josh Hawley (R-Mo.) with an email that read “F–k you.”

Hawley had initiated the exchange by sending a mass letter criticizing NBA commissioner Adam Silver and the league’s relationship with China.

ESPN declined comment, though their actions will likely become obvious this week when the ultra-prominent Wojnarowski is not on the air. The end point of Wojnarowski’s suspension, if that has been defined, is not yet known.

After news of the suspension hit social media, several players including LeBron James showed their support for Wojnarowski by using the #FreeWoj hashtag on social media.

#FreeWoj ✊🏾 but in the #Verzuz battle I’m taking @ShamsCharania