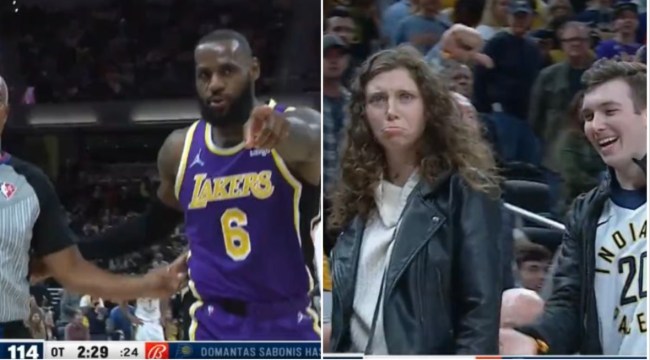 With 2:28 left in overtime, LeBron pointed out two fans sitting courtside and had them escorted out of the building.

LeBron unhappy with some fans courtside in Indiana pic.twitter.com/1Ud3B69G1E

One of the fans who got kicked out by LeBron mocked the Lakers superstar by calling him a crybaby as she was being removed from her seats.

lebron got a fan kicked out the game in overtime 💀 pic.twitter.com/EHkmph3wLI

It’s currently unclear why LeBron got the fans kicked out, but it’s interesting that he has the power to just point at people and have them escorted out from games.

LeBron James doesn’t say what exactly happened with the fans who were ejected in OT, but says generally when obscene gestures and language come into it, it can’t be tolerated.

LeBron says it was “obscene gestures and words” from the guy. https://t.co/SDQ5LoKHSU

After the incident, “LeSnitch” began trending on social media.

And yes, we definitely will talk about the LeSnitch incident that happened at tonight's game in Indianapolis.

This is why I’ve alway said that Lebron James may be a great player, but he is a pussy and not even close to being on the same level as Michael Jordan or Kobe Bryant. They would’ve dropped 60 on their opponent and told the fans themselves to shut the fuck up #LeSnitch