I Knew My Cavs Would Be Bad, But This Is Worse Than I Ever Thought (And Proves Why LeBron’s The GOAT) 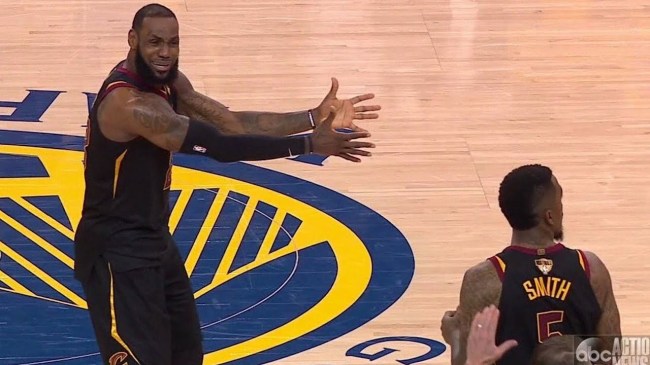 LeBron James is the greatest basketball player to ever grace God’s green earth. And, if you say otherwise, you’re either ignorant, a straight-up hater or have no appreciation for the game of basketball.

Look, I know I’ve mentioned tons of times before how I have a man crush on LeBron, which comes from over 18 years of watching him play in both high school and the NBA. But proclaiming that James is the GOAT — surpassing my childhood idol of Michael Jordan — goes beyond personal bias or appreciation articles that I’ve penned over the years. It’s a fact, and, as the soon-to-be 34-year-old LeBron James enters a new chapter in his illustrious career with the L.A. Lakers, it’s time to appreciate the guy before he declines; if that’s even possible.

If you’re looking for proof of just how insane LeBron James really is, take the current state of the Cleveland Cavs. They suck. No, like, they really, really suck, and aren’t showing any signs that they’re capable of turning things around anytime soon — save for LeBron demanding a trade back to his old ball club because he… well, nevermind, that sh*t ain’t happening. And James took this crappy squad to the NBA Finals last season.

Currently sitting at 0-5 as I write this, the Cleveland Cavs are dead last in point differential this season, losing by a remarkable margin of 13 points so far this year. The fact that there’s still 77 games left makes me cringe at where that number may end up. Things are so bad that, again, just five games into the season, Cavs big man Larry Nance Jr. felt it necessary to tweet this out to the fan base after (once again) getting crushed the other night to keep the team winless.

Stay with us Cavs fans.. There’s no quit in this team. We’ll continue to fight and scrap for every game. Your support now means more than ever! #BeTheFight #WeAreCleveland

Yikes. Dudes, it’s not even November yet, and we’ve got an NBA player pleading with fans to “stay with us.” Hand me a couple kegs, ’cause it’s about to be a long, long year.

The current state of the Cavs is bad, but the future doesn’t really look much better. Not only is the team handcuffed by aging veterans on deals paying them like stars — looking at you J.R. Smith, George Hill and Kevin Love — but the team went so far in the past four years when LeBron James was still in town that they have limited resources in the next couple of years. Plus, you know, Cleveland isn’t really a destination for superstars to flock to in free agency. Thankfully, their 2019 draft pick is top-10 protected, and won’t just be given away to the Atlanta Hawks for a trade back in 2017.

Making matters worse for the Cavs? The team’s owner, Dan Gilbert, is an egomaniac who actually believed his team was good enough to compete in a sh*tty Eastern Conference this year without LeBron James. Forget some of the rumors last year leading up to James’ departure this summer, because the clearest sign for him bolting was Gilbert, who, like some people, just never appreciated James’ all-around talent. It was the reason why longtime NBA writer Chris Sheridan proclaimed as much in August of last year on Twitter.

NBA source said today: "This will be LeBron's final season in Cleveland. He is 100 percent leaving. Relationship with owners beyond repair."

Look, I could go on and on about how Gilbert has royally F’ed the Cavs for the short- and long-term thanks to his overconfidence. That’s a disservice to LeBron James, though, because this piece is about his greatness, not how sh*tty the franchise he used to play for currently is.

What makes LeBron the GOAT is this simple fact: He carried this miserable, embarrassing and pathetic excuse for an NBA team to the NBA Finals last season with, for the most part, the exact same roster. He had a starting lineup in Game 1 of that NBA Finals that consisted of Kevin Love, JR Smith, George Hill and Tristan Thompson. He saw Jeff Green play 35 minutes in that Game 1 — JEFF F’IN GREEN! James then saw Smith snag a clutch rebound in a tie game with seconds left, turn into the dumbest man in basketball history by not understanding the situation, and, you know, missed making a simple pass to LeBron James for a game-winner.

Literally not a day goes by that I don’t think about how wide open LeBron was. Damn you JR pic.twitter.com/r3fp6H1MoB

Now in Los Angeles on a young and inexperience Lakers team, LeBron James will be going to the Western Conference Finals this year. Book it. I’m calling it now because he’s the GOAT, and there’s no reason to think that a squad with a few former All-Stars mixed with up-and-comers like Brandon Ingram, Kyle Kuzma and Lonzo Ball, among others, aren’t better alongside “The Chosen One” than the pile of crap he had previously.

Sure, the Western Conference is the varsity league compared to the JV Eastern Conference, I don’t care. LeBron James is the greatest basketball player ever, and the sad state of the Cavs should be enough proof to believe that this guy is capable of doing almost anything.