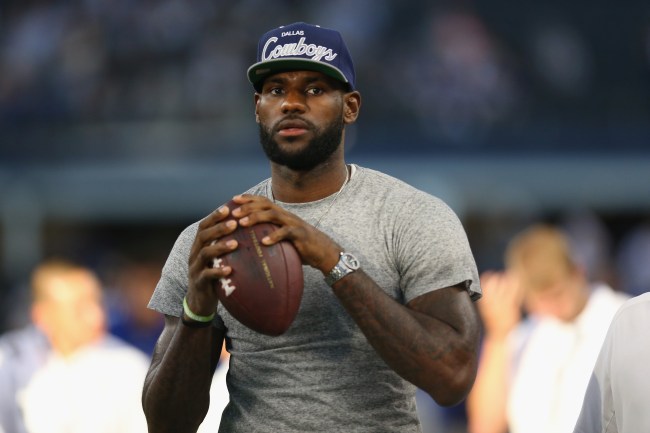 In the wake of news breaking this week that Jerry Jones offered LeBron James an NFL contract during the NBA lockout season of 2011, let’s immerse ourselves in the LeBron James, NFL wide receiver alternate universe.

“If he really wanted to be a full-out wide receiver, he probably could have had 500 more yards receiving and 10 more touchdowns,” said Brian Windhorst, who then covered James in high school at the Beacon Journal before moving to ESPN. “He just had to protect himself, which you can’t blame him for.”

***Retweet or Tag someone who plays both sports 🏈🏀***#HBT✊ pic.twitter.com/qRme13yHGc

Obviously, stats from 15 years ago paint an incomplete picture, but they lend credibility to the maddening circular argument that LeBron James could have been equally or even more dominant on the football field than he is on the hardwood.

Former Packers safety Mark Murphy, who was a defensive coordinator at St. Vincent-St. Mary while James was a student, witnessed first-hand the damage LeBron could inflict on the football field.

“I’ve been around a lot of great receivers,” Murphy told ESPN in 2009. “I tell people that I rate my top receivers — coaching, playing, or watching — as James Lofton, Jerry Rice, Steve Largent, and LeBron James.”

LeBron played a total of one game his freshman year of high school, a playoff qualifier against Wickliffe. The game was scoreless through the middle of the third quarter when James got his shot. LeBron finished the game with more than 100 yards receiving and two touchdowns in a 15-14 loss.

Willie McGee, one of James’ close friends high school teammates, described a LeBron play that stuck with him throughout the years.

McGee recalled one play in particular in their junior season. After jumping offsides, James insisted the Irish run the exact same play again. This time, McGee says James caught the ball one-handed with his left while in stride, and he just remained in his running motion past defenders.

During the lockout season in 2011, LeBron James squared off against Kevin Durant in a flag football game. Yes it’s flag football BUT IT’S ALL WE GOT, OKAY! Check out the highlight tape below and tell me you wouldn’t pick this man first in your fantasy draft if given the chance. You cannot. Unless you’re a lunatic.