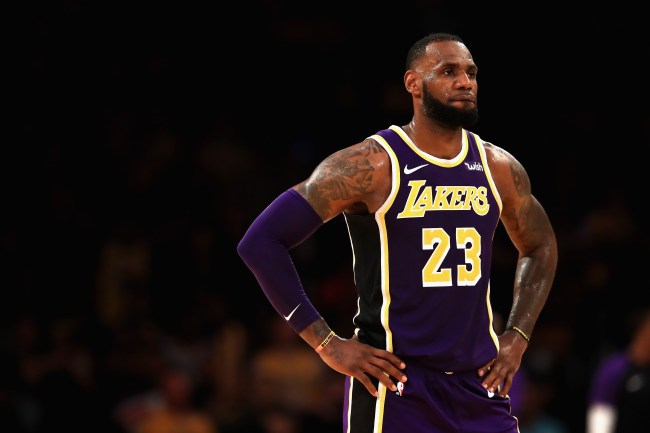 LeBron James is the biggest athlete on the planet, I don’t care what you argue. Sure, soccer star Cristiano Ronaldo may have the most Instagram follower on the planet, which would typically mean he’s the most popular athlete, but, unlike CR7, LeBron hasn’t had a playboy past who rotates through models and celebrities. For that reason, when James slid into the DMs of a random Instagram gal last year named Heidi Hoback, it was no surprise that the Internet freaked out.

The L.A. Lakers star is such a polarizing figure that, no matter what he does, anything that his name is attached to is going to get news. And, of course, sliding into DMs on Instagram of a pretty gal is just one of those ways.

While the whole thing kind of blew up, getting a bunch of attention to Heidi Hoback, she’s shown to have been upfront about the thing and has had some fun with it. Case in point? Here Halloween costume last night, where she donned a Lakers Girl outfit to have a little fun with people.

Kudos to you, Heidi, because I’ve got a feeling even LeBron James had a little bit of a laugh over this.

Although Heidi Hoback didn’t take the bait from James last year after he slid into her DMs on Instagram, she did detail how things went down, which we wrote about last year.

“I honestly was just having a normal day,” Hoback said. “Going over and hunting and then this wild encounter with a buck happened and it just so happened to be right when LeBron DMed me, so I thought I would share that.”

“I took to Snapchat to share it with my followers because I thought it would be a funny story. You know, the message was pretty innocent as far as I know. And then some of my followers informed me that he was married, which I had no clue because I don’t follow him. I wouldn’t consider myself a fan so I wasn’t aware of that at all. I guess that’s why it’s been made into a bigger deal than I originally thought it’d be.”

These two have probably never met, and probably won’t ever meet, but LeBron James will always be somewhat attached to Heidi because of his IG attempts — and if she’s going to keep playfully punking him about it, we’re all winning.