LeBron James Posts A Video Of Himself Doing Squats On Instagram, Immediately Gets Roasted Over His Technique 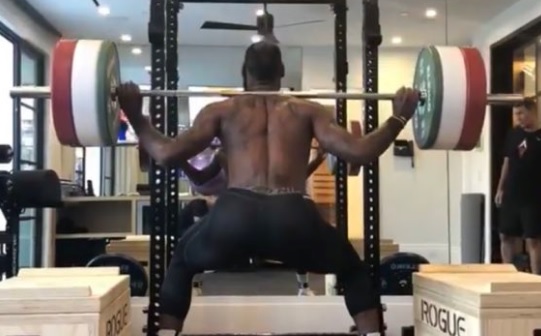 A Week after announcing he was going to the Lakers LeBron James made it official last night when he finally signed the contract.

The Lakers front office was obviously gushing over the signing.

Magic Johnson, the Lakers’ president of basketball operations, called James “the best player in the world” in a news release.

“He loves to compete and is an awesome leader who is about winning and making sure that his teammates are successful,” Johnson said. “The Lakers players are excited to have a teammate who has been to nine NBA Finals. It’s a huge step closer to returning the Lakers to the playoffs and to the NBA Finals.”

This is a historic moment for the Lakers, and we could not feel more grateful and honored,” Pelinka said. “When LeBron James – a perennial NBA MVP and champion who is playing at the most astonishing levels of his career – chooses to join the Lakers, it serves as the ultimate validation for what we are building here. However, we all know that the work is not yet done.”

Now that he’s officially signed with the Lakers LeBron posted a video of himself getting ready for the upcoming season by doing squats in the gym.

Vacation time is over 👀 @kingjames pic.twitter.com/ZD3AbUBYsA

Of course everyone on the Internet turned into squatting experts and ripped LeBron over his technique.

Lebron really out her posting videos of him doing half ass squats on his IG story ..

What kind of horrible squat form is that lmaoooooo

Hes a physical freak ; but who the fuck okays these squats? ass to grass baby , shorten up that stance/

I am trying real hard not to comment on those goofy ass squats Lebron was doing.

I am trying real hard not to comment on those goofy ass squats Lebron was doing.

Idk what exercise lebron was doing on instagram this morning, but it was not squats

LeBron watch your weight shift to your left hip on the way down and watch the right knee collapse inward, you need to find a strength coach who will tell you that and do some corrective exercises to get your Glute Medius to work. Squat depth doesn’t matter if form isn’t right.

Lebron might be the best basketball player of all time but he's in the quarter-squat gang. So that makes me happy.

Who would have guessed Lebron is that guy in the gym that doesn't go all the way down on a squat https://t.co/erM5PqdFYC