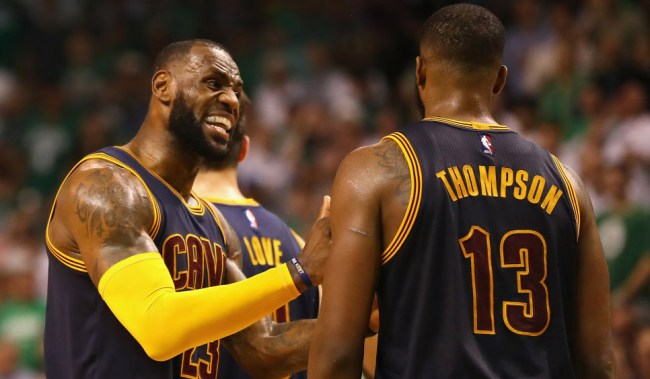 LeBron James is, according to several reports, not a huge fan of the Kardashians. Which makes things kind of awkward since Khloe Kardashian is reportedly pregnant with James’ teammate Tristan Thompson’s baby.

James does have cause for concern, however, as many of the athletes Khloe has dated in the past have struggled mightily. James Harden fell apart. Odell Beckham struggled. Lamar Odom, well, you know. Rashad McCants says she cost him $70 million. And Matt Kemp went from one of the best players in baseball to just another guy.

So when the when the TV crew from Keeping Up With the Kardashians showed up at the Cavaliers training facility King James was less than thrilled.

To show how less than thrilled he was, LeBron took out his camera and posted a video to Snapchat with some funny, albeit brutal commentary, “The shit show is here today! Look at the shit show gang. There they go.”

At least the look on Thompson’s face says that LeBron, despite showing zero chill in the clip, was just poking fun. For now.

Cavs fans on the other hand? Well…

BREAKING: Cavs chances of winning the 2018 NBA Title plummet to 0% after reports surface that Tristan Thompson got a Kardashian pregnant

Khloe Kardashian is pregnant with Tristan Thompson's baby. Tristan is cursed for life and as long as he on the Cavs, they are too

Yo if Khloe Kardashian is pregnant. The Cavs need to just drop Tristan Thompson. Take that Kardashian curse somewhere else 😂😂

if tristan thompson got a kardashian pregnant, the @cavs and @cavsdan need to trade him to the warriors, let them eat that curse.