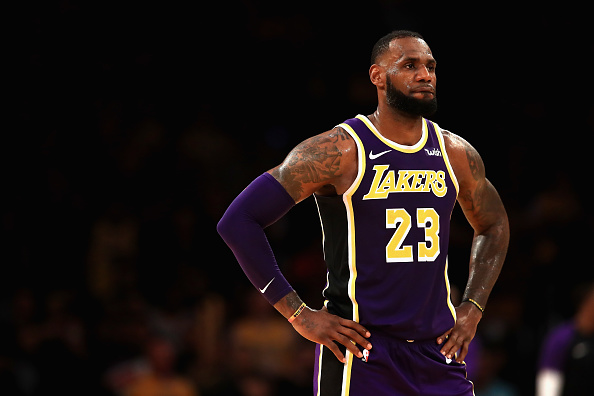 Last night the LeBron James led Lakers got beat down by a Toronto Raptors team that was missing Kawhi Leonard.

The game was lopsided that it was basically over after the first quarter.

Without Kawhi Leonard, the Raptors are beating the Lakers 41-10 in the FIRST QUARTER.

Entering tonight, the Lakers hadn't trailed by 20+ points this season.

They trail the Raptors by 25 points after the 1st quarter, their worst point differential in a 1st quarter in the shot-clock era (since 1954-55). pic.twitter.com/euWIL1104b

After the game, TMZ spotted LeBron making an appearance at Diddy’s birthday party in West Hollywood.

TMZ Sports spotted James on the way into Diddy’s 49th birthday party at Ysabel in West Hollywood … where he celebrated with the likes of LLCOOLJ, Kourtney Kardashian, Usher, Mary J Blige and Kid Capri.

James pulled up with his wife, Savannah, in his $340k Rolls Royce but made it clear he didn’t wanna talk basketball.

Lakers fans have been frustrated with LeBron’s play during the team’s struggles and lashed out at the super star on Twitter for going to Diddy’s party after a loss.

After losses, Kobe would spend hours studying film and be at the gym at 4 a.m. LeBron went partying. That’s the difference between good and great. https://t.co/cwMdJBFEOO

He wants to be popular. If he forces it it will come off sad. He moved to LA for movies. Produce them and star in them. He doesn’t care about basketball anymore. He would of stayed in the east if he wanted to be a “Basketball Player”.

Maybe if he cared about winning like a good teammate does, he would hit the gym after a game like that. The thought of Kobe, MJ, Magic, or Bird partying after getting their ass kicked is laughable #NotMyGoat #soft #Lebron #loser

Lebron getting washed by the Raptors and immediately going to Diddy’s party energy.

The point is not that LeBron went to party with Diddy after a Lakers loss. The point, of course, is that Kobe wouldn't have.

Lebron didnt play in the 4th cause he had to get rested for Diddy’s party lmaoo dawg.

LOL and people call this man the GOAT? Come the end of this year he won't even be in the top 5 best players in the league.