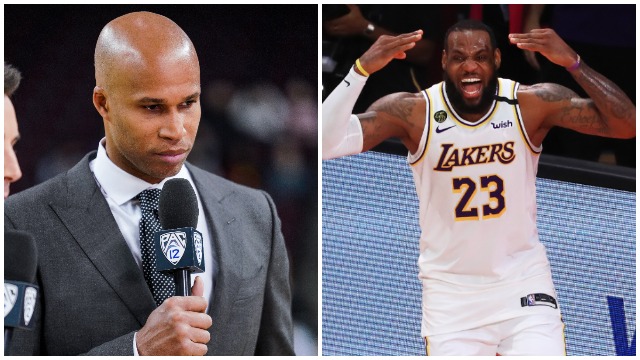 King James only wears the crown to cover the bald spot on the back of his melon that is so expansive, Kawhi couldn’t even palm it.

LeBron’s hairline is running out of time 🤭 pic.twitter.com/OQZPBkewOw

If there’s one thing the greatest physical specimen of our time has to be insecure about, it’s that his hair follicles have become lazy enough to make Michael Beasley look like Rudy Ruettiger. And insecurities typically manifest in putting others down, which is often why the internet’s biggest trolls don’t have a checking account.

Richard Jefferson, a man who abandoned the dream of luscious locks back when Bush was in office, recently posted footage of former teammate and brother in hair deficiency LeBron James roasting him for his shiny bald head during a live broadcast during the Lakers championship run.

Do TV they said!! Try not reacting when @kingjames says this to you on live TV and you have to act like everyone at home didn’t just hear that 🤬🥚😂 pic.twitter.com/A6eAqSjFeR

In the below video from 2017, it’s clear that LBJ hasn’t come to terms with his eventual fate, whereas RJ is rocking his baldness with the veracity of Tim Duncan rocking ill-fitting jean shorts off the TJ Maxx clearance rack.

On Thursday’s episode of the Endless Hustle podcast, we speak with Richard Jefferson about LeBron’s hairline, how LeBron acts riding a wine drunk, and much more.