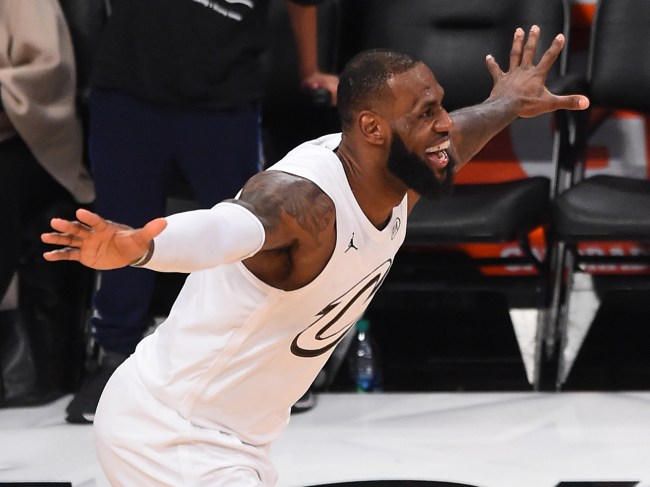 LeBron James knows that every single move of his is calculated. Whether that’s how he speaks to the media, motivates his teammates or interacts with other players around the league, the three-time NBA champ knows that he can pretty much manipulate the league however he wants to. That’s not to say he abuses that power, but, let’s face it, the dude is the most influential athlete on the planet for a reason, so he makes subtle reminders that he’s got something brewing.

The latest example of James doing this might have come tonight during the NBA All-Star Game Draft, which had LeBron and Giannis Antetokounmpo choose their teams for the event next weekend. With the selections broadcast live in the second year of the draft process, it was pretty cool to see the banter back and forth between the two team captains, and we even saw a trade that sent Ben Simmons to Team LeBron for Russell Westbrook from Team Giannis.

When the dust finally settled, though, Twitter noticed something peculiar with LeBron James’ roster — the dude pulled a quick one on us all, choosing names like Kevin Durant, Kyrie Irving, Kawhi Leonard and Klay Thompson, all of whom are considered the top free agents this summer, as well as Anthony Davis, whom was linked to the Lakers for the past month or so and could still get traded to L.A. this summer.

Coincidence or strategy? Well, social media seemed to think it was all part of LeBron James’ master plan in the end. Take a look at some of the reactions from Twitter.

That man is fooling NO ONE 😂😂😂

Lebron drafted a whole team of free agents. His halftime speech is literally going to be a lakers pitch lololol

Lebron is a genius. He purposely selected players that he wants on the Lakers for his All-Star team (AD, Klay, etc). You spend more time with your team on the weekend. Lebron has a better chance to persuade players on his team to signing with the Lakers.

LeBron’s team is basically everyone who could be on the Lakers next year and Harden.

Team LeBron basically every player on his Lakers wish list.

LeBron drafted his All "Please come to the Lakers team".

Lebron picked Kyrie, AD, and Klay to his all star team😂 he tryna get the lakers right for next season

LeBron James is a basketball genius, so don’t think for a minute that this wasn’t by design. He had his targets and, boom, he went for the dudes who he can not-so-casually joke with about playing together on the Lakers next season. Hey, if it works, more power to him, right?

The selection of Anthony Davis by LeBron brought a pretty solid moment during the draft, too, with Giannis calling for tampering when James replied that he definitely wanted the big man as his teammates. Take a look.

The NBA All-Star Game is always a fun weekend, with fans seeing a bunch of high scoring games. But, come this summer, it could end up being the place some superstars decided their offseason fates, all thanks to the brilliance of LeBron James selecting the guys he wants on the Lakers next year. Maybe the league should look into this?